Trump Steered $150,000 From a Ukrainian Oligarch to His Personal Foundation, Michael Cohen Says

Donald Trump personally directed his personal attorney to have a Ukrainian oligarch donate $150,000 to his personal charity in lieu of a speaking fee for a brief internet interview at an economic conference during his presidential campaign, according to the attorney.

Testifying under oath before the House Oversight Committee Wednesday, Michael Cohen said that Victor Pinchuk asked Trump to speak at a Ukrainian-American economic forum in 2015 when his presidential campaign was already underway.

Trump couldn’t attend in person, so Cohen said he negotiated a $150,000 fee for a 15-minute interview conducted with translators on Skype that would be shown at the forum. But, Cohen said, Trump told him to have the fee made as a donation instead of a payment.

Pinchuk, a Ukrainian billionaire and steel magnate, made the donation in September 2015, during Trump’s campaign for the presidency, according to a 2018 story in the New York Times. The money represented the largest donation Trump’s foundation received that year from anyone other than Trump himself.

The Donald J. Trump Foundation has faced increasing scrutiny since Trump began running for president. After New York’s attorney general sued the foundation last year, it agreed to dissolve in December and give away its assets as part of the ongoing investigation. Special Counsel Robert Mueller is also investigating the donation, according to the Times.

During his presidential campaign, Trump repeatedly lambasted Democratic nominee Hillary Clinton for donations made to her private foundation while she was Secretary of State, at one point calling it “most corrupt enterprise in political history.” 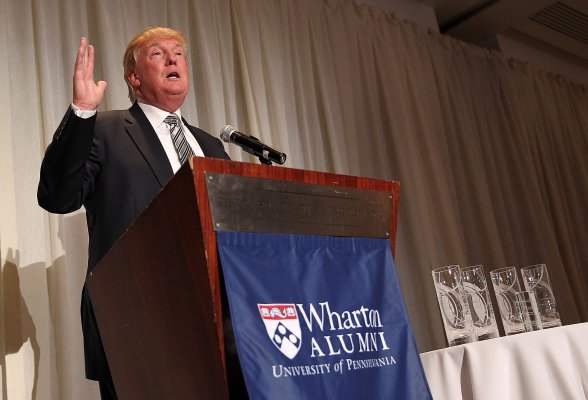 Trump's Lawyer Threatened Schools on His Grades
Next Up: Editor's Pick