'Have Fun in Prison!' The Republican National Committee Just Taunted Michael Cohen in a Video

The Republican National Committee delivered a rather unsubtle message to Michael Cohen as he delivered his highly anticipated public testimony to the House Oversight Committee on Wednesday.

As President Trump’s lawyer and “fixer” publicly derided his former boss as a “racist,” “conman” and “cheat,” the RNC released a 47-second video aimed at Cohen titled “Have Fun in Prison!”

In a video set to jaunty music, the group cobbled together old clips of Cohen speaking effusively about Trump, using words including “generous,” “compassionate” and “kind.”

The release of the video shows how far the RNC is distancing itself from Cohen, who in 2017 was named to the organization’s finance leadership team as deputy national chairman.

As the RNC gleefully points out, Cohen is indeed heading to prison in two months, on May 6, after pleading guilty to lying to the Senate intelligence committee and campaign finance violations.

“Mr. Trump knew of and directed the Trump Moscow negotiations throughout the campaign and lied about it,” Cohen said Tuesday. “He lied about it because he never expected to win the election.” 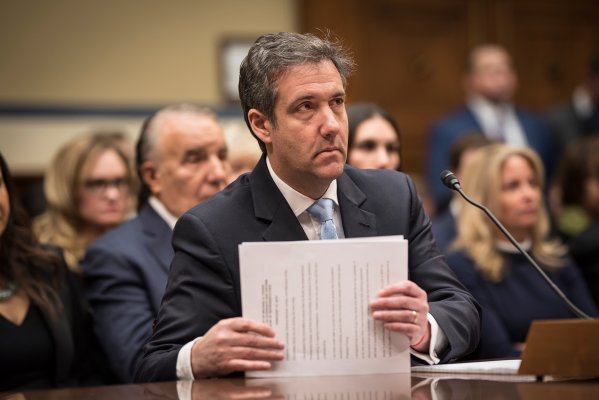 Michael Cohen Testifies Before Congress
Next Up: Editor's Pick