The 5 Funniest Stand-Up Specials Ever

We asked comedy greats to name the five works in their fields that influenced them the most and made them laugh the hardest. Tig Notaro has time and time again shattered any notions of what stand-up comedy should be. She opened a 2012 set by saying, “Hello, I have cancer.” She performed topless in 2015 to reveal her double mastectomy scars. Her own sets, as well as her favorite sets by other comedians, share an impulse she describes as “being as connected to the moment as possible.”

It felt like I was definitely doing something bad or wrong: I would watch him with the TV turned down low and maybe two inches from the screen. His facial expressions and his delivery, with how high his voice would go in certain moments, would destroy me. As a child, I was like, “Oh man, I would be friends with this guy.” I often wonder if there was some part of me that was given the go-ahead to share my own personal issues because I had been so drawn to him and his comedy as a child. Richard wasn’t in the forefront of my mind when I did my show at Largo [Live, in which she talked about being diagnosed with breast cancer]; there was no clear comedic influence, but I wonder if that was woven in there.

I always describe myself as a no-nonsense person that’s all nonsense. I feel like Martin has that, and that’s what really spoke to me about him and this special. I imagine he’s very no-nonsense — and one of the silliest, silliest people. I think again it goes back to being as connected to the moment as I can. His career has given me permission to go beyond being only a stand-up. I’ve begun producing and writing and acting with my wife, and it’s just so much fun. I would definitely tie some of that back to Steve Martin.

I hadn’t ever seen someone solely rely on their words in the way he did. Watching his stand-up is like reading a book — one of the funniest books. There wasn’t the slightest inflection in his voice. There was no look on his face to indicate anything. It was purely words. That’s serious power.

I never missed Paula Poundstone when she came to town. I just thought she was such a bizarre person. She’ll lie down on the floor. She’ll hunch over the stool. You feel like you’re sitting in somebody’s living room who’s telling really funny stories and because it’s their house, they’re comfortable with rolling around on the floor. I wanted what she had as far as ability to write a joke, tell a story, but also be able to be present in the moment, just be open to anything that’s happening in the room. Interacting with the audience makes shows feel real. When it’s done well and with inspiration and talent behind it, you feel like you’re in one big party together.

As a gay person myself, watching her explode made me able to see a path to where I was headed. I was like, “Oh, you can be from Mississippi or Louisiana and be gay and want to do stand-up and actually do it!” I co-directed Ellen’s Netflix special and helped with consulting. I remember telling her that this one little line from Taste This just destroyed me every time. She’s talking about how she doesn’t understand hunting, and says of a deer: “It’s a poor little innocent animal thinking little deer thoughts: ‘I wonder where the berries are. What’s this on my hoof?’” I feel like that line was one of my biggest comedy influences.

As told to Andrew R. Chow 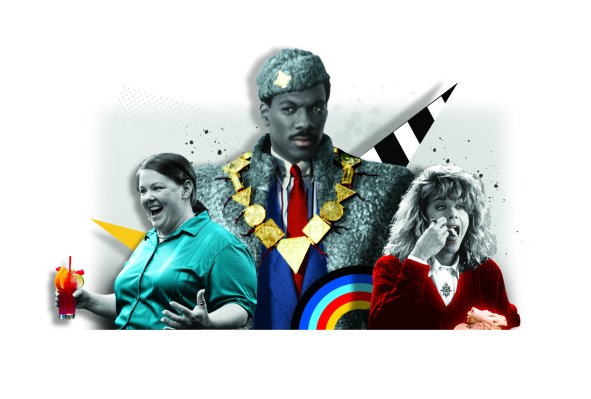 The 5 Funniest Movies Ever
Next Up: Editor's Pick