“Whatever you’re looking for, you will find here,” the film adaptation of The Quiet American says of Vietnam.

President Donald Trump and North Korean leader Kim Jong Un have arrived in the buzzy Vietnamese capital searching for detente over the north’s nuclear program, as the reclusive state stands on the brink of being able to strike at targets across the world. Both leaders will be looking for a win from this second summit, and will start jockeying Wednesday night within the plush confines of the hotel Metropole in Hanoi, where The Quiet American was hammered out in the 1950s by English author Graham Greene.

At the $300 a night Metropole (now part of the Sofitel Legend group), a colonial luster lingers—all polished woodwork, antique ceiling fans and iron filigree, with a suite named for Greene and a vintage Citroën parked out front. An escargot-serving sidewalk cafe wraps around the hotel’s exterior, adding to the sense of Parisian chic in the upmarket French quarter. The Swiss watchmaker Patek Philipe has a boutique nearby and a number of boulangeries can be found in the area, along with the chocolate-box facade of the Hanoi Opera House.

Built in 1901, the Metropole was a favorite haunt of celebrities and diplomats. Charles Chaplin and Paulette Goddard honeymooned there in 1936, and it reportedly played host to Bill Clinton and Jane Fonda. In 1972, Joan Baez famously took cover in an underground bunker there during the Christmas Bombings. Trump himself has previously visited the hotel, reportedly staying there in 2017.

During the war, the Communist north used the stately accommodation to house foreign guests and renamed it the “Reunification” hotel. A 1990 restoration revamped the premises, which had languished as the country recovered from Vietnam War, which killed an estimated 3.8 million Vietnamese and 58,000 American soldiers.

The latest installment in the Metropole’s war storied history could see it become an emblem of peace should Trump and Kim make any breakthroughs. At the very least, the Metropole is set to become the iconic backdrop of their second nuclear summit as the pair plan on a 20-minute conversation Wednesday night. The two are also scheduled to have dinner with aides, before Trump departs around 8:30 p.m. 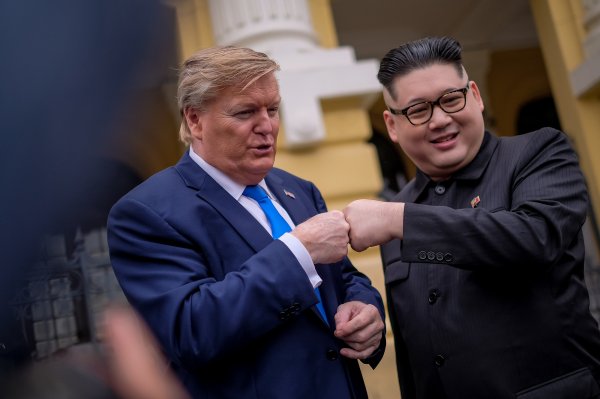