President Donald Trump talked to his former personal attorney about hush money payments in the Oval Office, then cut him checks from his personal account and a business account to reimburse him, Michael Cohen told Congress Wednesday.

Speaking under oath before the House Oversight Committee, Cohen described a meeting with Trump in the White House in February of 2017 in which they discussed reimbursements for the payment.

“He’s showing me all around and pointing to different paintings,” Cohen testified. “And he says to me something to the effect of ‘Don’t worry, Michael. Your January and February reimbursement checks are coming.'”

Trump at first denied knowing about the payments, then later said he only made them to keep Daniels from making untrue allegations that would harm his personal life and argued that he did nothing wrong because no campaign money was involved.

But federal prosecutors who charged Cohen say that by using their own money, Cohen and Trump essentially gave an in-kind donation to the campaign which they did not report, a violation of federal law.

On Wednesday, Cohen gave more details about how the payments were made.

He testified that just days before the 2016 election, he and Daniels’ attorney settled on $130,000 for the rights to her life story about her affair with Trump, a common technique for preventing someone from speaking about it. He said he went straight to Trump’s office to discuss it with him and Trump Organization chief financial officer Allen Weisselberg.

“He acknowledged to Allen that he was going to pay the $130,000 and that Allen and I should go back to his office and figure out how to do it,” Cohen said.

Cohen testified that he used a home equity loan to pay Daniels, then received 11 check installments from Trump to reimburse him while he was president. Trump later claimed that the payments to Cohen were a “monthly retainer” for legal services, but Cohen told Congress there was no retainer agreement.

He also submitted to Congress copies of two checks, one from Trump’s personal account signed by Trump and another from the revocable trust that holds the Trump Organization signed by Donald Trump Jr. and Weisselberg.

Daniels, for her part, briefly commented on the testimony via Twitter.

Here’s a closer look at Trump’s past statements about the issue.

March 7, 2018: White House denies that Trump knew about the payments

White House spokesperson Sarah Huckabee Sanders told reporters in a daily press briefing that Trump was not aware of any payments to Daniels.

“I’ve had conversations with the President about this,” she said. “And, as I outlined earlier, that this case has already been won in arbitration and that there was no knowledge of any payments from the President, and he’s denied all of these allegations.”

Trump maintained he did not know where Cohen got the money to pay Daniels.

April 26, 2018: Trump says Cohen did not receive campaign funds to make the payment

In an interview on “Fox and Friends,” Trump said campaign funds did not go to Cohen for the payment.

“From what I see he did absolutely nothing wrong,” Trump said of Cohen. “There were no campaign funds going into this … which would have been a problem.”

May 3, 2018: Trump confirmed that he reimbursed Cohen

Trump claimed that he kept Cohen on a monthly retainer, which acted as reimbursement for the non-disclosure agreement Daniels signed along with the $130,000, in a series of tweets. He again said he did not use campaign money to pay Cohen.

Speaking on “Fox and Friends,” Trump said the hush money came from him personally, and not from campaign funds.

“They came from me,” he said. “And I tweeted about it. But they did not come out of the campaign.”

Trump also claimed that he only found out about the payments, made to Daniels and another woman who claimed she had an affair with him, “later on,” contradicting an earlier statement given under oath from Cohen in which he said Trump had told him to make the payments.

A sentencing memo for Cohen filed by federal prosecutors implicated Trump in illegal campaign contributions, saying the president’s former fixer “acted in coordination with and at the direction of” Trump in making the hush payments with “the intent to influence the 2016 presidential election.”

Trump said the filing exonerated him. 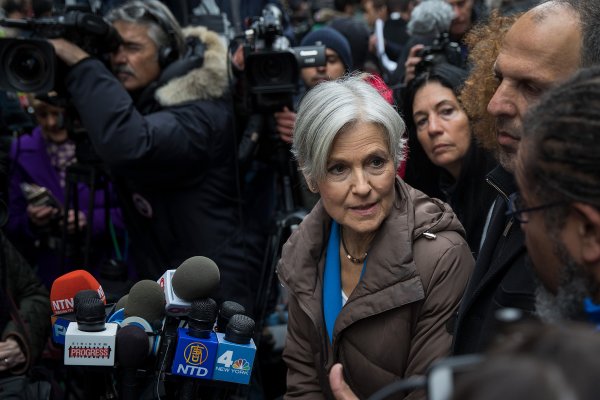 Jill Stein Is Belatedly Paying Off Her 2016 Campaign Fines
Next Up: Editor's Pick