How the Marines Hacked the Super Bowl Ads

Advertisers paid more than $5 million for 30-second Super Bowl commercial slots in 2019. But the Marine Corps found a way to do it at a fraction of the cost, while reaching only the younger audience they were targeting.

According to conversations with Marine Corps officials supported by FOIA requests, the Marines spent just under $1 million on seven 30-second Super Bowl LIII commercials on game day, including two during the game itself.

But instead of purchasing one of the multimillion dollar cable television slots, the Marines streamed its ads to the 7.5 million people who watched the game on laptops, cellphones, streaming sticks and other personal devices, which includes much of the younger audience that they need to recruit each year.

Lieutenant Colonel Christian Devine, the director of marketing and communication strategy for the U.S. Marine Corps Recruiting Command, told TIME the decision to air the ads via streaming was a strategic one. Paying $5 million for a traditional cable television spot was not an option for the second-smallest military branch, he said.

“If I had to report to Congress that I spent $40 million of taxpayer dollars on the Super Bowl for a handful of 30-second ads, this would be a whole different conversation,” Devine joked. “I’d be fired.”

The total cost of this year’s NFL advertising package, which included ads during divisional and conference playoffs, amounted to less than 3% of the Marines’ annual paid media budget.

Broadcasting companies generally reserve some ad space for local 30-second spots right before the Super Bowl returns from commercial breaks. For the 7.5 million people who watched the game via streaming, CBS had to fill those gaps with other, non-local coverage. That’s where the Marines came in.

While CBS could not confirm how many people who streamed the game were watching the exact moment the Marines’ commercials came on, they did say that, on average, 2.6 million devices were tuned in each minute of the game.

That’s hard to do when you look at the pool they can recruit from. Approximately 71% of the 34 million 17- to 24-year-olds in the U.S. do not qualify for military service due to their health, physical characteristics or educational background, according to Pentagon data analyzed by the Heritage Foundation. And increasingly, many of those who are qualified don’t want to enlist.

In late 2015, 85% of survey respondents to a Harvard Institute of Politics poll said they’d probably or definitely not join the military. Harder yet, the Marines are one of the least popular military branches among young people. Only 5% of young people indicated they would likely join the Marine Corps, compared to roughly 7% that said they’d join the other three military branches, a November Marine Corps Times report says.

These statistics lead to hefty competition among the Marines, Air Force, Navy and Army. The branches go as far as paying adults signing bonuses, in addition to the health care and educational benefits military service entails. The Army offers between $4,000 and $40,000 for new recruits. The Marines, according to a recent tweet, offers between $10,000 and $70,000 for some to re-enlist, and between $1,000 and $8,000 for new Marines.

“When it comes to competition among the services, this is a knife fight,” said Devine. “There’s only a finite pool of young women and men in our core demographic of 17- to 24 year-olds that are even qualified for military service, and many in this generation having little-to-no interest in considering the military as a career path. So when you have four services competing to connect with this Millennial generation in unique ways, as well as increasingly compete with private-sector industries for this same quality talent, the battle for their attention with a message of purpose is critical now.”

Jonah Berger, a marketing professor at the Wharton School of Business with expertise in social influence, says digital advertising is especially effective when the target audience is young people.

“Younger people may watch the Super Bowl, but if they are watching the Super Bowl, they’re probably not watching it on a broadcast network — they are probably watching it through streaming. And so doing a streaming-only ad is a great way to reach those people in a cost effective manner,” he argues. “Rather than spending a whole bunch of money to reach people who might not be interested, why not go after the specific audience you’re interested in, or at least an audience that’s closer to the audience you’re interested in?”

Statistics back up Berger’s theory.

The number of cord cutters in the United States was expected to reach 33 million people by the end of 2018, according to an eMarketer forecast from July. Further, approximately 70% of 25- to 34-year-olds watched the majority of their television through streaming services, compared to 36% of 45- to 54-year-olds, according to a survey by Streaming Media, which researches and writes about digital video services.

Derek Rucker, a marketing professor and persuasion expert at Northwestern agreed airing the commercial to cord cutters only was a cost effective decision. This way, they weren’t wasting advertising dollars on older people who are less likely to join the military.

“They’ve thought carefully about who their target audience is, which is younger individuals. They’re finding a way to essentially limit waste via the media form,” he says.

Maj. Gen. James W. Bierman, Commanding General of the Marine Corps Recruiting Command, says it’s especially important to be aware of how military branches are using their funds, especially given the current national debt is $22 trillion and climbing.

“The Marine Corps is a frugal service that has a long history of stretching every dollar. We believe we must continually prove our worth to the American people. Who we are, what we do, and why it’s of value,” he says. “Our marketing and advertising sets the conditions for our recruiters in a challenging market. This is critical as we attempt to reach out to an increasingly larger percentage of the population that lacks familiarity with the military and the Marine Corps in particular.”

The Super Bowl has always been one of the most desired advertising avenues, Rucker argues. But now, there are new ways to advertise during the game without breaking the bank. “I think a lot of brands are trying to figure out how to ambush the Super Bowl,” he says. “They want to take advantage of it without paying the Super Bowl dollars.”

Facing increasingly tougher odds, it’s probably never been more important for the Marines to be effective with their marketing.

“We don’t want to, no pun intended, spike the ball the end zone here,” Lieutenant Colonel Devine says. “But we do a pretty damn good job of finding high-quality young men and women who want to join America’s Marine Corps.” 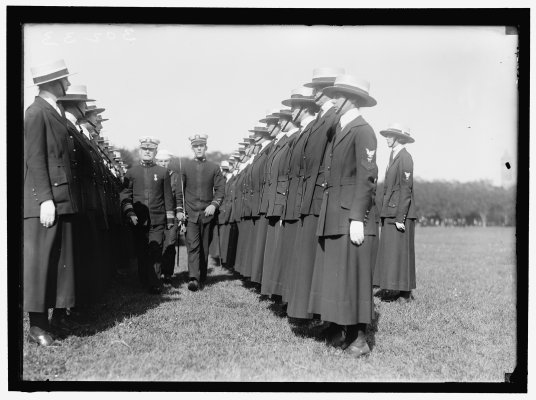 Not Every Woman Who Served With the U.S. Military During World War I Got the Same Treatment. Here’s Why
Next Up: Editor's Pick