New York Gov. Andrew Cuomo inspects the South Tube of train tunnels running between New York and New Jersey during an overnight tour on Oct. 17, 2018. A new study found that New York City-area home values would drop by $20 billion if the sole commuter-rail link between New Jersey and Manhattan were forced to close for repairs.
Victor J. Blue—AP
By Elise Young / Bloomberg

New York City-area home values would drop by $20 billion if the sole commuter-rail link between New Jersey and Manhattan were forced to close for repairs, according to a transportation group study.

The Regional Plan Association, a Manhattan-based research and advisory group, also calculated losses of $16 billion to the U.S. economy and $7 billion in federal, state and local taxes if the tunnel weren’t fully operating for four years. President Donald Trump has declined to provide federal funding for a second tunnel, saying the states need to commit a higher cost share, while boosters say money had been promised by his predecessor, Barack Obama.

New Jersey Governor Phil Murphy said he spoke to Trump in Washington over the weekend and they briefly discussed Gateway, the $30 billion proposed project that would include the tunnel and upgrades along Amtrak’s Northeast Corridor, the busiest U.S. passenger-rail route.

“We each think it makes sense to sit down,” Murphy said Tuesday at a news conference in Hamilton.

Amtrak, the tunnel’s owner, has warned that the century-old link, with as many as 450 trains each weekday, must be closed to repair structural and electrical-system damage caused by Hurricane Sandy in 2012. Capacity would drop 75 percent if one of its two tubes were shut for the work, or otherwise weren’t open to train traffic.

“From job availability to housing prices, the price of household goods, and even the cost of air travel, every sector of our economy would feel the effects of a partial shutdown of the trans-Hudson tunnel,” Tom Wright, president of the association, said in a statement. “It is a slow-moving, predictable crisis which we have the capacity to prevent.”

The study found that 38,000 New Jersey Transit commuters would need alternative transportation to Manhattan, and the region’s roads, among the nation’s most congested, would have to accommodate 10,000 more cars. Almost 500,000 workers would have longer commutes, potentially jeopardizing their employment, it found.

“This region and this nation will lose billions of dollars, property values will plummet, and congestion and climate damage will get even worse if we allow the status quo of relying on a century-old one-track-in, one-track-out system to continue,” Gateway Program Development Corp. trustees Jerry Zaro, Steven M. Cohen and Tony Coscia said in a statement. 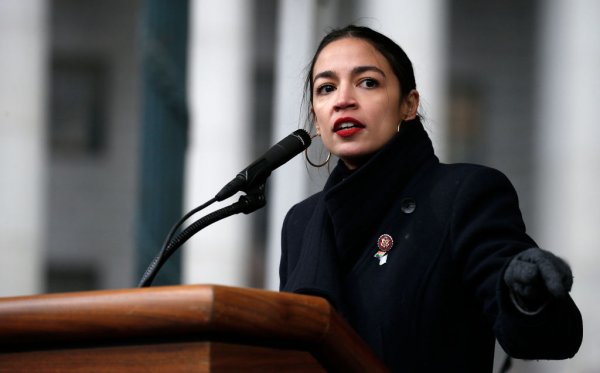 Alexandria Ocasio-Cortez Celebrated Amazon Pulling Out of New York––But the Governor Says It Cost the City 25,000 Jobs
Next Up: Editor's Pick