When Michael Cohen testifies before Congress Wednesday, lawmakers won’t ask about the hottest topic on Capitol Hill: the Trump campaign’s interactions with Russia. But the other issues he discusses may turn out to be just as big a headache for the president.

Democrats said they would set aside the topic of Russia for now so as not to interfere with Special Counsel Robert Mueller’s work. But they are just as keen to dig into Trump’s affairs, especially given Cohen’s years of work for the Trump Organization.

“Clearly, there’s no one closer to Donald Trump with respect to his business practices,” Rep. Hakeem Jeffries, who chairs the House Democratic caucus, told reporters on Tuesday. “What we need to hear from Michael Cohen is that information, presented in a transparent fashion, and the American people can make a decision from that.”

The hearings show just how much legal hot water Trump is currently in. His private business, family charity, campaign, inauguration, Administration and even his eponymous Washington hotel have been tangled up in various investigations or civil lawsuits. His former campaign chairman, deputy campaign chairman, national security advisor, longtime informal adviser and self-described fixer — Cohen — have either pleaded guilty, been found guilty or are currently fighting legal charges.

And Democrats are now in charge of the House of Representatives, where they intend to highlight all of these subjects, starting with Cohen.

In a memo outlining the scope of Wednesday’s hearing, chairman Rep. Elijah Cummings said there are multiple lines of inquiry the committee wants to explore with Cohen, including Trump’s “debts and payments relating to efforts to influence the 2016 election,” “compliance with campaign finance laws,” “compliance with tax laws” and Trump’s “business practices,” among other subjects.

But the scope of questioning is likely to be broad, especially since Congress can ask about the truthfulness of Trump’s public statements, said former federal prosecutor Renato Mariotti.

“The greatest danger for Trump is that Cohen reveals additional wrongdoing by Trump or his staff, which is possible despite the limitations on Cohen’s testimony,” he told TIME. “For example, I expect members of Congress to ask Cohen about the White House staff and lawyers who knew in advance that he planned to lie to Congress.”

White House officials and Republicans in Congress are already seeking to undermine the credibility of Cohen’s testimony, after Cohen pleaded guilty in November to lying to Congress in previous testimony. “Disgraced felon Michael Cohen is going to prison for lying to Congress and making other false statements,” White House Press Secretary Sarah Sanders said in a statement to the New York Times. “Sadly, he will go before Congress this week and we can expect more of the same. It’s laughable that anyone would take a convicted liar like Cohen at his word, and pathetic to see him given yet another opportunity to spread his lies.”

In a letter to Cummings, House Oversight Committee Republicans wrote, “When Cohen appears before our Committee, we can only assume that he will continue his pattern of deceit and perjury.”

But Cohen’s highly anticipated testimony still may add to Trump’s problems. Mueller’s investigation is ongoing, multiple other arms of the Justice Department around the country are looking to other questions stemming from the Russia probe and Trump’s business dealings, and congressional committees have launched their own investigations into some of the same questions.

“The American people deserve to know whether Donald Trump has been functioning as the President of the United States of America or as the equivalent of an organized crime boss,” said Jeffries. “Michael Cohen can shed some light on that very important question.” 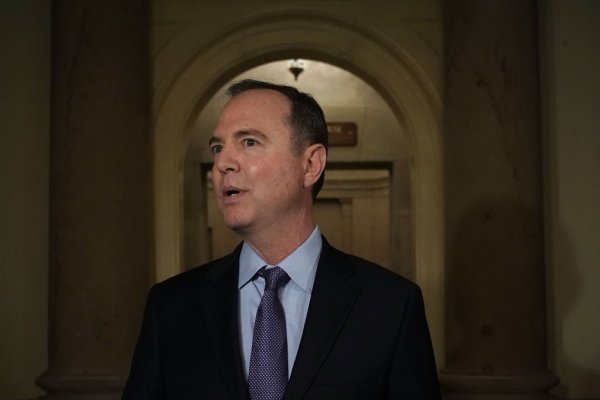 Schiff Would 'Absolutely' Would Sue Over Mueller Report
Next Up: Editor's Pick