Pilots Have Their Own Secret Language. Here's What They're Really Saying

If you’ve ever passed the cockpit while boarding a flight and tried to pick up bits from your pilots’ conversation, you probably didn’t glean much from them. From terms like “niner” to “Zulu,” pilot-speak can sound like its own language.

While most of the phrases flight crew use were borne out of a need for clear and succinct communication over an occasionally fuzzy radio transmission, according to aviation experts, there are also more colorful phrases that pilots say were conceived of in the sky and shared widely among staffers.

“A lot of the ways we say things to be meaningful to other pilots is kind of monkey-see, monkey-do,” says Ferdi Mack, senior manager at the Pilot Information Center, of picking up lingo on the job. “Part of your challenge is to get it and understand it.” And flight crews often use the same pilot slang in slightly different ways.

So if you’ve ever wondered what your flight crew is talking about, you can save yourself years of aviation training with this rundown of pilot jargon.

“Let’s kick the tires and light the fires”

Famously uttered by Harry Connick Jr. in Independence Day, the military phrase signals that a plane is just about ready for takeoff, says Mark Baker, a commercial pilot of 35 years and current president of the Aircraft Owners and Pilots Association (AOPA). Once the crew completes the pre-flight gear inspection, it’s time to ignite the engine and take to the sky. These days however, it’s much more common to hear pilots announce that the plane is “cleared for takeoff” — particularly on commercial flights — for the sake of brevity.

This phrase alerts air traffic controllers when a military aircraft, (usually a Navy carrier pilot), is flying over water, says Tom Haines, a private pilot and editor-in-chief of AOPA’s Pilot magazine. In the event that the aircraft encounters an emergency above water, like trouble in a combat zone, the controllers can deploy the proper rescue vessels given the plane’s location. Once a flight has crossed the shore and resumes flying over land, they’ll call in to air traffic control that they’re “feet dry,” Haines adds.

“We’ve got a deadhead crew flying to Chicago”

Despite how it may sound, this isn’t an insult: Off-duty pilots or flight crew who board a commercial flight as passengers to fly back to the plane’s home base are called “deadheads,” Haines says. “Deadheading” is fairly common: if a flight crew lands in their destination but must depart from a different airport for their next shift, an airline can fly the off-duty crew members there, as long as there are seats available, he says.

In rare cases, a deadhead crew can boot paying passengers. United Airlines created a customer service frenzy when a viral video captured a passenger’s violent removal from an overbooked flight to make room for four deadhead United crew members. Airport security officers dragged a bloodied David Dao down the aisle of the plane after he refused to give up his seat. Two security officers were fired after the incident, and United has since settled with Dao.

“There’s a pilot in the jumpseat”

If there aren’t any seats in the passenger cabin available for deadheads, they can claim an extra fold-up seat in the cockpit, known as a “jumpseat.” Most jumpseats are reserved for FAA inspectors or off-duty flight personnel traveling back to their home base, says Ross Aimer, a retired United Airlines pilot of 40 years.

“You basically beg for a ride on your airline or somebody’s else’s to get to work,” Aimer says. Several airlines offer courtesy jumpseats to pilots from other companies, too.

Since pilots can pass through multiple time zones in one trip and must communicate with air traffic controllers from around the world, aviators follow “Zulu time,” or Greenwich Mean Time (GMT), the universal time zone of the skies, Aimer says. GMT is the time kept by the Royal Observatory in Greenwich, London. So if it’s 2 a.m. in London for example, it’ll be 02:00 “Zulu time” for every pilot in the air.

But to avoid confusion among passengers, pilots refer to the time zone of their destination when speaking with passengers over the intercom.

“George is flying the plane now”

There’s a “George” on nearly every commercial aircraft, but he’s not a crew member. “George” is a nickname for a plane’s autopilot system that follows a programmed set of points to the flight’s destination, taking into consideration changes in turbulence and altitude, according to Aimer. Pilots often deploy George to command the plane when it reaches cruising altitude or when they’ve flown for more than 10 hours, when they’re required to rest per FAA regulations for two-pilot planes.

“We’re flying through an air pocket”

Turbulence-averse flyers, beware: “air pocket” is just another word for the winds that jostle a plane from different directions. Aimer says the term “air pocket” causes less panic than “turbulence” among passengers.

“As soon as we say ‘turbulence,’ people get scared,” Aimer says. “We use ‘air pockets’ to calm [passengers] down.”

Aviators often speak “pilot English” to avoid miscommunications over radio transmission. “Tree” for instance, means three, “fife” is the number five and “niner” means nine, says Tom Zecha, a manager at AOPA. The variations stemmed from a desire to avoid confusion between similar-sounding numbers, he says.

After a long day in the sky, crew members often need to unwind—sometimes adjusting to a completely new time zone. “Juice” refers to a cocktail that former American Airlines flight attendant and aviation cabin safety expert Kathy Lord-Jones describes as a “mixture of [alcoholic] beverages” left over from a flight. Crew members are prohibited from drinking on the job; rather, they share the “juice” at the end of their “duty day,” or the full shift that starts with sign-in at the airport and ends with check-in at their hotel, Lord-Jones says.

Airline passengers likely won’t ever hear their pilot use this term, which is reserved for communication with air traffic controllers. When pilots notice something unusual with their aircraft that stops short of an immediate emergency, they use “pan-pan,” a signal of urgency and attention, Baker says. If one of a multi-engine aircraft’s engines has failed, for example, pilots might say “pan-pan” to get controllers’ attention and request an emergency landing.

When pilots use this signal, other aviators on the same radio frequency will typically “shut up and let you get your message across,” Baker says, allowing air traffic control to provide the appropriate aid and prevent a crisis in flight.

The number of “souls” on an aircraft refers to the total living bodies on the plane: every passenger, pilot, flight attendant and crew member, according to Lord-Jones. Pilots often report the number of “souls” when declaring an emergency, she says, so rescuers know the amount of people to search for.

Correction: The original version of this story misdescribed the meanings behind some aviation phrases. Zulu time is a 24-hour time system, not a 12-hour time system. “Souls on board” refers to all living bodies on the plane, not just the passengers. 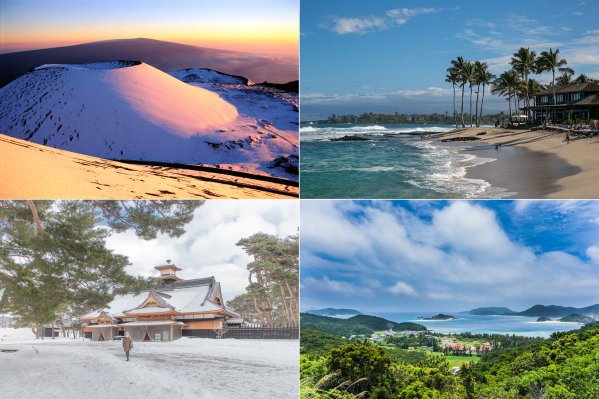 ‘Fire and Ice’ Vacations Are the Latest Travel Trend. Here’s How to Plan One
Next Up: Editor's Pick