Just near the entrance to Vietnam’s Military History Museum, families posed for photos in front of a statue made from wreckage of Hellcat engines unearthed in the wake of the war. A few meters away, banners hung across the medians of misty avenues reading: “Hanoi, the city for peace.”

This week, the Vietnamese capital gets the chance to live up to that nickname as U.S. President Donald Trump touched down Tuesday for his second summit with North Korean leader Kim Jong Un, where the pair will attempt to revive denuclearization talks.

Trump and Kim are expected to meet twice, and both are determined to walk away with a win. For Trump, the stakes are high and the bar is low — the failure of their meeting in Singapore last June to produce meaningful security outcomes has left him in need of a compromise. So long as Kim doesn’t provoke his counterpart, the two should be on course for a closing handshake.

America’s stated goal has long been the complete, verifiable and irreversible denuclearization of the Korean peninsula — which experts agree is not on the horizon. Trump said prior to departing from Washington that he’d settle for a moratorium on testing ballistic missiles and nuclear weapons. “I’m not in a rush, I don’t want to rush anybody, I just don’t want testing,” the President said Sunday night. “As long as there’s no testing, we’re happy.”

Read more: How the U.S. Could Lose a Trump-Kim Summit

Kim could extract a lot from Trump given that low bar. His aims are likely twofold, experts say: a declaration of peace and some form of sanctions relief, possibly by creating exceptions that would allow more inter-Korean economic cooperation. The former would be largely symbolic; it would be the first time the U.S. has acknowledged its willingness to bring a formal close to the Korean War, which began in 1950 and ended in armistice three years later.

A declaration would not end the war — only a treaty agreed by North and South Korea, the U.S. and China could achieve that — but it would legitimize Pyongyang’s case that America’s alliances in Asia are obsolete. “A declaration of peace is a confidence building measure. Nothing more,” says Christopher Hill, a former U.S. ambassador to South Korea now at the University of Denver. “The concern is that it could be used by the North Koreans to argue that the U.S. no longer needs troops in South Korea.”

What might worry America’s allies is the possibility that the two leaders are in harmony on this particular issue. Some 28,500 U.S. troops are stationed in the South, while about 50,000 more are in Japan. The security establishment considers this posturing critical to maintaining peace in Northeast Asia and ultimately countering Chinese dominance.

While a declaration of peace would not necessitate a pullout, Trump may not even need a formal treaty to convince him to do it. In May of last year, he became the first President in more than three decades to suggest a retreat, when he reportedly ordered the Pentagon to explore options for withdrawal. The last time that was so much as considered was under President Jimmy Carter — when North Korea had neither nuclear weapons nor long-range missiles.

“It was a bad idea then, it’s a worse one today,” says Daniel Russel, who served as assistant secretary of state for East Asia and Pacific Affairs under the Obama administration and is now at the Asia Society. “Preventing the next war,” he says, “should be a higher priority than resolving the legal technicalities of the last one.”

Experts say the de facto peace — meaning no hot war — that has held under armistice for more than six decades is better than a premature peace deal. According to Sung-Yoon Lee, professor of Korean Studies at the Fletcher School of Tufts University, ending the war could increase the risk of conflict. A treaty would dissolve the U.S.-led U.N. Command established to keep the peace, and American allies South Korea and Japan risk being abandoned in the crosshairs of an unhinged neighbor.

But would that matter if a peace deal was achieved? “North Korea has flagrantly violated both the letter and spirit of every single international agreement it has signed,” Lee says. This would be no different.

For Kim’s part, he is expected to offer Trump something that at least resembles a willingness to reduce his country’s arms. But his concessions are likely to fall well short of what the U.S. wants: a full inventory of nuclear assets and weapons of mass destruction; access for international inspectors; the destruction of key facilities; and a moratorium on testing. Kim could offer to decommission the North’s enrichment facilities, but he may already have plenty of material to keep production humming.

“Pyongyang’s behavior shows no willingness to verifiably dismantle its nuclear program, and Kim is likely sincere when he says that his nuclear arsenal is the nation’s ‘treasured sword’ that no power can remove,” says Russel, of the Asia Society. Kim, he says, will get rid of his weapons only when America’s deterrent is out of his yard and alliances in Asia are broken.

“This roughly translates into English as ‘when Hell freezes over,’” he says. 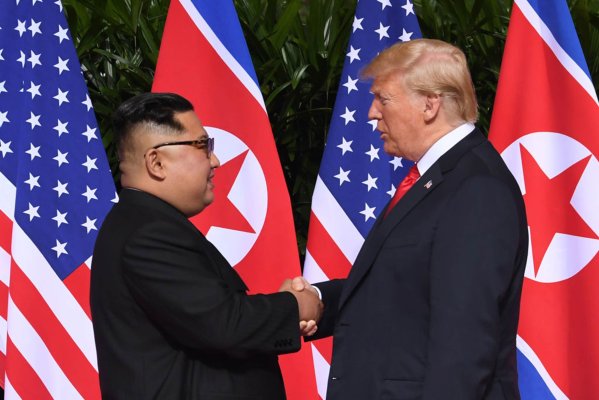 How the U.S. Could Lose in Vietnam
Next Up: Editor's Pick