Get Ready for Foldable Smartphones, Because They're About to Be Everywhere

For a peek at the cutting-edge smartphones you can expect to see (and even buy) later this year, look no further than Mobile World Congress, the annual Super Bowl of the handset world. And one clear trend from this year’s MWC, which wraps up Feb. 28, is the rise of “foldable” smartphones. With the appearance of a regular handset but the ability to open up to become more tablet-like, foldable smartphones are looking like the next big thing in gadgetdom. But will they be a bona-fide hit with consumers, or quickly relegated to the proverbial junk drawer of tech history?

Smartphone makers have been teasing foldable phones for years, but they became more real than ever this year with Samsung’s Feb. 20 announcement of the Galaxy Fold, just days before MWC began in earnest. As the name suggests, the Galaxy Fold is a smartphone that unfolds, opening to reveal a 7.3-inch display inside. On the front of the device is a 4.6-inch screen you can use when the Galaxy Fold is closed. It’s thicker than your average smartphone, features six cameras, and will cost you a whopping $1,980 when it arrives later this year.

Not to be outdone, Chinese smartphone maker Huawei introduced a foldable phone of its own at this year’s MWC. Instead of Samsung’s book-like design, the Mate X takes its 8-inch flexible OLED screen and goes in a different direction, wrapping it around one side of the asymmetrical device and giving users three different screen sizes to choose from depending on their preference. When folded, the Mate X has a 6.6-inch bezel-free display on the front, and a smaller 6.4-inch rear display next to the trio of cameras on the device’s non-folding side. When unfolded, the Mate X lets users take advantage of its 8-inch display, run apps side-by-side, and watch video uninterrupted by any camera notches. The Mate X also supports 5G connectivity, a major feature the Galaxy Fold lacks. That said, the Mate X’s expected $2,600 selling price might be a bit much for all but the most die-hard of early adopters.

Other smartphone makers have also announced or are rumored to be working on foldable phones, including Lenovo and China’s Oppo.

Both the Galaxy Fold and the Mate X carry shocking prices for a smartphone. But breakthrough tech often starts out costlier before coming back down into the realm of reasonability. “People getting all caught up in pricing, or the fact that it’s not perfect, are totally missing the point,” says Stephen Baker, Vice President and Industry Advisor for technology and mobile at research firm NPD Group. He argues that, in a world where most smartphones have become riffs on boringly familiar designs, it’s nice to see smartphone makers taking bigger gambles. “I think it’s great that different companies are taking different approaches to what a foldable phone will look like.”

Will consumers actually want foldable phones? After all, other more out-there designs, like Motorola’s customizable “Moto Mods” lineup, haven’t made much of a dent. Baker’s point aside, the most glaring issue will no doubt be cost. At $1,980, the Galaxy Fold will be Samsung’s most expensive smartphone, blowing past the controversial $1,000 mark set by Apple’s iPhone X when it came out in November 2017. And $2,600 for the Huawei Mate X is even more outlandish by comparison. But, as a rule, tech tends to get cheaper over time — 4K televisions that once cost thousands of dollars can now be had for a far more reasonable three figures, for instance.

Then there’s the matter of how useful foldable phones will actually be. That, in turn, will depend on whether software designers create apps that truly take advantage of their novel form factor. “Whether foldable phones are a gimmick that will go away over time or whether they are a truly disruptive device category will largely depend on software and OS integration,” says Gartner Senior Director and Analyst Werner Goertz. “If the apps fully support the dual mode, then the entire product will produce good use value, especially for professional and prosumer users.”

Samsung made sure to point out that companies like Google are updating their apps to make sure of the Galaxy Fold’s screen, and others are likely to follow suit. But with other companies announcing or considering still more radical form factors, developers may struggle to create apps that work well on all of them.

Neither Samsung nor Huawei have offered reviewers access to their foldable phones, so it’s hard to get a feel for how useful they’ll actually be. Still, foldable smartphones have plenty of promise, and mark one of the most exciting gadget developments from both a technical and cultural perspective in ages. “Long term, everybody does want a bigger screen with them,” says NPD’s Baker. “And the ability to get a really big screen at the same time … makes a lot of sense, as opposed to carrying around multiple devices.” Like the glimpse of the future seen when Apple first debuted the iPhone, a proliferation in foldable screens could forever change how we interact with our technology and create and consume our favorite content. 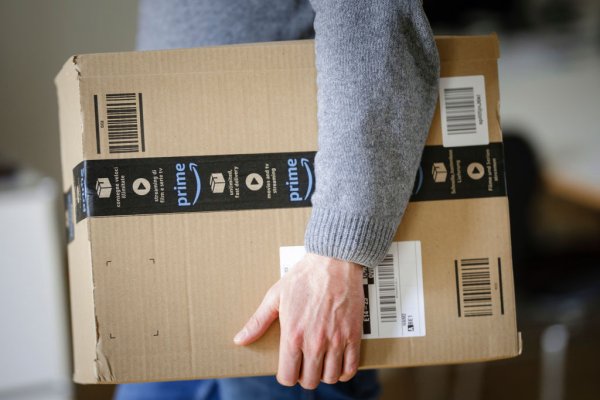 Amazon's New 'Amazon Day' Feature Lets You Get All Your Packages at Once
Next Up: Editor's Pick