Carol Danvers—the current Captain Marvel in the comic book world—has cycled through multiple aliases. As the protagonist of the upcoming Captain Marvel film, she most resembles the character that writer Kelly Sue DeConnick reimagined in 2012. But Captain Marvel’s history goes back to the 1960s, when Danvers appeared as a regular in different Marvel Comics series.

She began as an officer in the United States Air Force, where she meets Dr. Walter Lawson, who at the time held the mantle of the superhero Captain Marvel. The two get into an accident involving the explosion of a device created by the alien race known as the Kree. Captain Marvel saves Carol’s life, but Carol gains superhuman abilities in the process. Still, it’s not until the 1970s that Carol resurfaces as a superhero.

In the 1970s, Carol begins to fight crime under the moniker “Ms. Marvel.” While the costume she wore was the sort of skimpy getup designed to please straight, male readers, Carol in her human form was modeled after an unlikely feminist figure: Gloria Steinem. Even the “Ms.” in her name was a conscious nod to Ms. Magazine, the publication which Steinem ran at the time.

In the Ms. Marvel series, Carol leaves a position at NASA in order to edit a publication called Woman Magazine. “She wore oversized glasses and blond, middle-parted hair and neck scarves,” DeConnick told TIME in an interview. “It was Gloria Steinem fan fiction in the most literal sense.”

Gloria Steinem testifies before Congress on May 6, 1970.
Bettmann—Bettmann Archive

In the comics, Woman Magazine was owned by the Daily Bugle, and Carol had to report to Peter Parker’s cantankerous boss, J. Jonah Jameson. Carol refused to publish articles on diets or beauty, instead focusing coverage on a certain female superhero. Eventually, Jameson fired Carol. He never discovered her secret identity.

Ms. Marvel suffered through several egregious storylines in the 1980s, including an extended storyline in which a villain brainwashes and rapes her. She appeared sporadically in the 1990s and played a more significant role in the comics in the 2000s. Still, given that she has superhuman abilities that arguably exceed those of any Avenger, she remains a secondary character in most of the larger Marvel plot lines.

In 2012, Kelly Sue DeConnick — surmising that Carol’s “Ms.” monicker felt a little dated — pitched the Marvel editors on gifting Carol that Captain Marvel name, which had long sat unclaimed. She rebranded the character with a military-looking costume and shorter hair. She also focused on Captain Marvel’s history as a fighter pilot and borrowed the swagger and attitude of record-setting pilot Chuck Yeager for the character. She’s a little bit cocky and very competitive.

Brie Larson’s onscreen version plucks aspects from both these historical figures. She’s a female fighter pilot at a time when the Air Force doesn’t let women find in combat and blazes a trail for women in the military. But she also exudes the confidence of someone who gets a kick out of risking their life to save the world. By the end of the movie, she is the most powerful superhero in the Marvel Cinematic Universe right now, and she knows it — after all, she has super-strength, super-stamina, super-durability, the ability to fly and the power to shoot beams out of her hands. She is, essentially, indestructible. 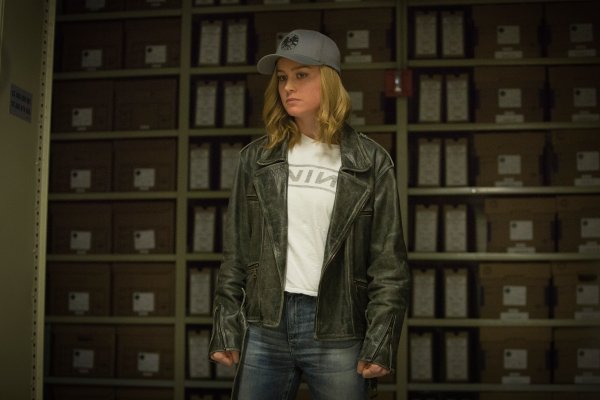 Captain Marvel Takes Place in the 1990s. Here’s How It Fits Into the Marvel Cinematic Universe Timeline
Next Up: Editor's Pick