When Olivia Colman got down to the thank-yous during her delightful acceptance speech for the Best Actress Oscar on Sunday, she had shout-outs for Rachel Weisz (Lady Sarah) and Emma Stone (Abigail.)

In the darkly funny movie The Favourite, Stone plays Abigail, the mischievous chambermaid (turned lady) to Colman’s impulsive Queen rolling deep with seventeen support rabbits, so it was only natural she’d get a shout-out. The charming speech enlivened the night, but one part sounded odd.

“Emily and Rachel, the two loveliest women in the world to fall in love with and to go to work with everyday,” she said. “You can imagine, it wasn’t a hardship,” she said through tears.

People watching the 91st Academy Awards had questions about why she said Emily instead of Emma.

It’s because that’s her name.

“My real name is Emily Stone, but when I started acting, that name was already taken by another actress, so I had to come up with a different one,” she explained in a 2017 interview with W Magazine.

But it wasn’t always “Emily.”

“For a 16-year-old, picking a new name is an interesting prospect, and back then I said, ‘I’m now going to be Riley Stone!’ So, for about six months I was called Riley.”

“At that moment, I realized that I just couldn’t be Riley. So I became Emma. But I miss Emily. I would love to get her back.”

It would appear that Colman and Stone are just close like that. 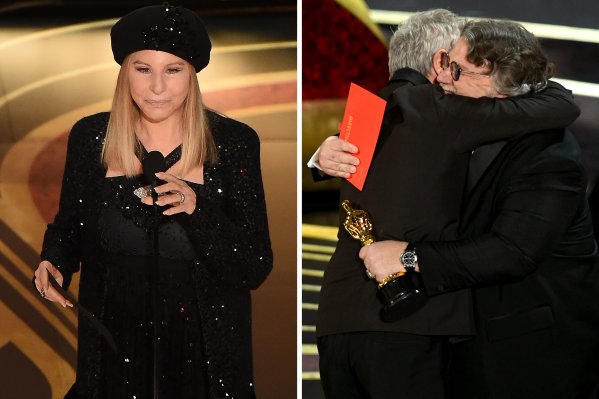 An Enjoyable Oscars Proved the Academy Should Give Up on Hosts
Next Up: Editor's Pick