Amy Poehler, Tina Fey and Maya Rudolph's Oscars Bit Made Us Wish They Had Hosted

There was no host for the 91st Academy Awards this year, but Tina Fey, Amy Poehler and Maya Rudolph almost made us forget.

The three queens of comedy took the Academy Awards stage after Adam Lambert and Queen’s performance opened the show to present the award for Supporting Actress.

Before presenting Regina King with the award for her role in If Beale Street Could Talk, Fey, Poehler and Rudolph took time to poke fun at the Academy’s tumultuous planning of Sunday’s ceremony, reminding viewers that there would be no host for the event, no awards presented during commercial breaks and no Achievement in Popular Film category. Rudolph also took the opportunity for a political message, assuring viewers: “Mexico’s not paying for the wall.”

But the Saturday Night Live alumnae also poked fun at some of the night’s most-celebrated films. “Roma’s on Netflix? What’s next, my microwave makes a movie?” Fey said, referencing the streaming service’s first-ever Best Picture nomination.

A Star Is Born, also nominated for Best Picture, had to take its fair share of punchlines, too. Rudolph assured Bradley Cooper, the film’s star and director, that he shouldn’t be ashamed by his character’s urinating onstage during the movie’s fictionalized Grammys sequence. “Don’t worry, Bradley: After two kids, I too have peed myself at the Grammys,” she joked. The actresses even closed their bit by singing Lady Gaga’s belted croon from the end of the film’s Best Song nominee, “Shallow.”

The network airing the show embraced the spirit of their set, too: “We’ll take Tina Fey, Maya Rudolph and Amy Poehler any day,” ABC News posted on Twitter.

Perhaps the stars should host next year’s ceremony in 2020. Watch the full clip below. 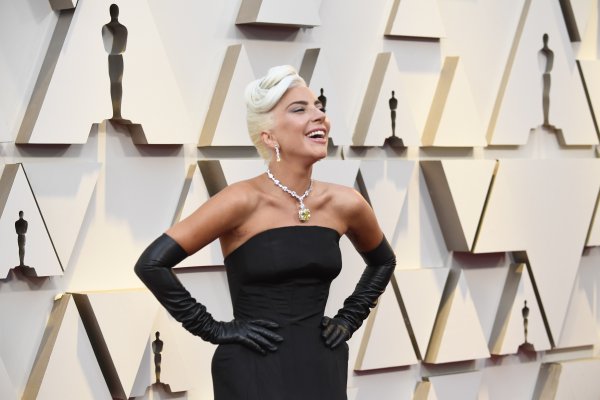 Lady Gaga Channeled Audrey Hepburn in Breakfast at Tiffany's on the Oscars Red Carpet
Next Up: Editor's Pick