As it turns out, the 2018 elections aren’t quite over. On Thursday, the North Carolina State Board of Elections ordered a new election in the state’s Ninth Congressional District after testimony revealed how a political operative likely tampered with absentee ballots.

The decision came three and a half months after Election Day, guaranteeing that the southern suburbs of Charlotte will be without a voice in Congress even longer as the final undecided race of 2018 is re-run.

It was an embarrassing setback for Republican candidate Mark Harris, who had maintained for months that he had no real-time knowledge of a campaign consultant’s shady — and perhaps illegal — efforts to submit absentee ballots to sway the vote in his favor.

It could also hurt Republicans, who have the advantage in that stretch of the increasingly purple state. It seems unlikely that Harris, an evangelical pastor, would try again to run for the seat. Democrats are betting on Dan McCready, a businessman and Marine veteran who trailed Harris by 905 votes, to try again.

And it was also a black mark on American democracy, a clear-cut case of electoral malfeasance that should have been caught much earlier in the process. Aside from temporarily disenfranchising three-quarters of a million people in North Carolina as a new Congress tackles everything from a partial government shutdown to investigations of the Trump Administration, it also hurt the country’s ability to preach free and fair elections overseas.

Harris had faced tough questions about the work done by campaign contractor Leslie McCrae Dowless, Jr., to collect incomplete absentee ballots. Voters said someone — apparently someone connected to Dowless — showed up at voters’ doors to collect absentee ballots. In some cases, the voters said, those ballots had arrived unprompted in their mailboxes. In North Carolina, it is illegal for third-party individuals, such as campaign workers, to handle ballots. And, in some instances, voters reported what they consider voter intimidation.

“I believe the people of North Carolina deserve a fair election and deserve to have their votes counted properly,” elections chief Bob Cordle said Thursday.

Read More: Russia Wants to Undermine Trust in Elections. Here’s How Rhode Island Is Fighting Back

The GOP has a roughly eight-point advantage in the Ninth District, which last had a Democratic Congressman in 1963. Democrats in 2018 weren’t betting big on McCready, who remains one of the party’s best recruits of the cycle, and Republicans were largely indifferent to Harris.

But it seems the Republicans got greedy. In Bladen County, requests for absentee ballots were more than double the level seen elsewhere. And the rate of no return was the highest in the state. Observers, including professors and local elections officers, spotted the abnormalities.

Democrats are now bullish on their shot in the district. After all, they almost tipped the district blue for the first time in a generation.

But Republicans counter that Harris was hardly their darling. He barely won his primary — and now it seems he may not have done it fairly — and didn’t attract much national support. The district remains conservative, these Republicans maintain, and the likely Democratic nominee won’t have the tailwinds that helped Democrats win the House majority in 2018.

Democrats’ answer: Look at their record in special elections leading up to November of 2018. They didn’t fare too poorly.

While the ultimate results of the election in Charlotte’s suburbs will not have a huge effect on the House, which remains firmly in Democratic control for now, it comes at a bad time.

An NPR/Marist poll taken on the eve of the election found that almost half of respondents lacked faith that votes would be counted accurately. Ongoing revelations about Russian efforts to influence the 2016 elections and undermine democracy may have boosted skepticism, especially among Democrats, though there is no evidence that Russia affected vote tallies.

Meantime, harsh and often inaccurate rhetoric from Donald Trump and other Republicans about “rigged” elections and voter fraud have taken a toll on confidence in the system on the right. 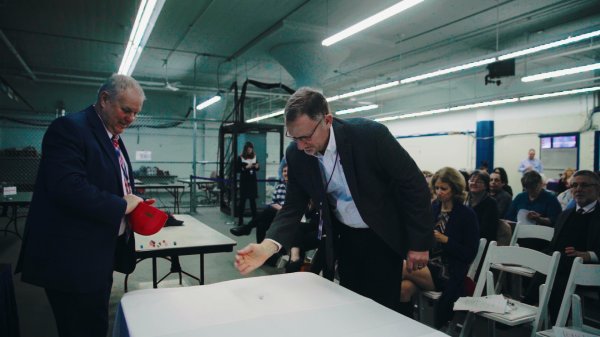 Rhode Island's New Strategy to Restore Confidence in Democracy
Next Up: Editor's Pick