Trump Wants '5G' and 'Even 6G' Wireless Technology 'As Soon As Possible.' What's He Talking About?

“I want 5G, and even 6G, technology in the United States as soon as possible,” tweeted Trump, who went on to imply the U.S. was falling behind due to policies preventing the adoption of wireless technology from companies abroad. While 6G doesn’t yet exist, 5G is just starting to be deployed around the U.S. and elsewhere.

Here’s what to know about 5G technology and its status in the U.S.

5G is simply the name given to the next generation in wireless cellular technology. Like the jump from 3G to 4G, 5G will bring with it considerably faster speeds, lower latency, and increased support for more devices. Compared to 4G LTE, the wireless cell technology used in smartphones today, 5G promises speeds up to 100 times faster and a response time up to 20 times faster.

5G promises to unleash a wave of new technologies that could benefit from its blazing-fast speeds and low latency. Smartphone owners will be able to stream games lag-free and watch 4K content with zero buffering. Autonomous vehicles could use 5G’s lower latency to respond quickly to changes in traffic and communicate with other connected equipment. And since 5G will be capable of helping low-power devices communicate with one another as coverage grows over the next decade, it could enable all sorts of new smart home tech, too.

As for this 6G technology Trump is talking about? While that will most likely be the name given to the next logical step in the advancement of cellular technology, no such standard has been defined, and any talk of G6 is purely theoretical at this point — we’re only just starting to deploy 5G, after all. That isn’t to say it’s not being thought of; research on the merits and potential uses for 6G (also known as “6Genesis”) is being conducted at Finland’s University of Oulu, for instance. Still, with an estimated debut in 2030, don’t hold your breath.

Unfortunately, you probably can’t take advantage of any 5G speeds yet because there are so few 5G networks and devices available for consumers. Right now, Verizon has a version of 5G providing homes with high-speed wireless connectivity, though it’s only available in a handful of cities. The company announced shortly after Trump’s tweets that it’s planning to expand mobile 5G coverage to over 30 cities this year. AT&T has mobile 5G service in a variety of cities as well, though users can only take advantage of it with a 5G hotspot at the moment. T-Mobile and Sprint will roll out 5G service sometime this year, they say. Some other services are advertised as a form of 5G, but that’s pretty much just marketing hype.

For a wireless provider to build a 5G network, it needs access to a wide array of wireless spectrum, the use of which is largely government-regulated. Since 5G relies on both very high and very low wireless frequencies, carriers are gearing up to cover the gamut. They’re spending billions on purchasing the rights to these frequencies either through buying companies that already holding the rights, or by bidding on spectrum bands auctioned off by the Federal Communications Commission (FCC) in an effort to speed up 5G deployement. “By making more spectrum available, promoting the deployment of wireless infrastructure, and modernizing our regulations—the three components of the FCC’s 5G FAST plan—we’ll ensure that American consumers reap the substantial benefits that will come from the next generation of wireless connectivity,” said FCC Chairman Ajit Pai in a Jan. 24 statement after concluding the first spectrum auction for 5G wireless service. Still, spectrum is a limited resource, and it’s taking time and money for wireless companies to get the spectrum they need for 5G.

There’s also the problem of equipment. Trump’s suggestion the U.S. is “blocking out currently more advanced technology” isn’t exactly wrong. Two Chinese companies, Huawei and ZTE, manufacture 5G wireless equipment that American companies like Verizon or AT&T could use to build out their 5G networks. But security official and other experts have warned that the companies’ equipment could provide the Chinese government with a way to spy on American citizens and companies. In fact, through the recent signing of the National Defense Authorization Act, Trump himself has explicitly banned government use of telecommunications equipment from companies like Huawei and ZTE. The U.S. government is even pressuring allies to block Chinese-made 5G equipment, though some, like Germany, aren’t listening. In addition, a recently introduced bipartisan bill is seeking to prevent Huawei and ZTE from supplying U.S. wireless carriers with equipment.

“Chinese telecommunications firms like Huawei represent a growing threat to American national security,” said Rep. Mike Gallagher (R-WI) who introduced the Telecommunications Denial Order Enforcement Act. “As state-directed enterprises, they ultimately report to the Chinese Communist Party and will be employed where and whenever possible to undermine American interests and those of our allies.”

All this is to say most Americans could be waiting longer for true 5G service to arrive in their neck of the woods. 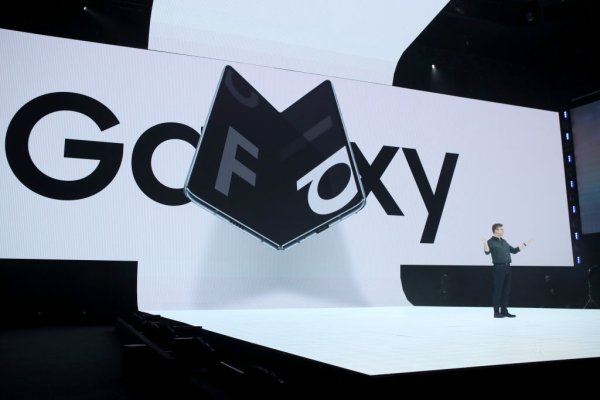 A Foldable Smartphone, AirPod Rivals, and More. These Are the 4 Biggest Things Samsung Just Announced
Next Up: Editor's Pick