The Quick Read on MBS's Tour of Pakistan, India and China

Saudi Crown Prince Mohammed bin Salman (MBS) travelled to Asia this week in his first major, multi-destination tour outside the Middle East since the Khashoggi incident spilled into international headlines. All told, he will have spent two days in Pakistan, two days in India, and two days in China visiting his political counterparts and signing deals by the time the week is out.

Asia was always going to be the most important component of the Crown Prince’s Vision 2030 plan to transform Saudi Arabia’s oil-dependent economy into a vibrant, diversified one better-suited to the economic realities of the 21st century. But plenty has changed on the geopolitical front since Vision 2030 was unveiled to the public in April 2016, from Brexit to Trump.

Then came the murder last year of Saudi journalist Jamal Khashoggi, which has indelibly tarnished the crown prince’s image in the U.S. and beyond. The fallout from that means that Saudi Arabia needs the buy-in from major Asian economic powers now more than ever. But as the trade war between China and the U.S. rolls on, and violence between India and Pakistan continues to flare, investment in Asia holds as much promise as peril for the Saudis.

Saudi Arabia is trying to make the best of the fraught situation, positioning itself as a potential peace-broker between India and Pakistan while trying to get closer to the Chinese, its largest trading partner (though a certain U.S. president will probably be less than thrilled with the prospect of the latter).

Trying to balance the hostilities between geopolitical rivals India and Pakistan is complicated by India’s strong relationship with Iran, which just happens to be Saudi Arabia’s mortal enemy. But in today’s world, one absent true global leadership, being a regional power-broker (and between two nuclear powers no less) can be a handsome reward if one handles it successfully. We just don’t know if the largely-untested 33-year old MBS has it in him yet.

Expect the Saudis to get more involved in China’s Belt and Road infrastructure initiative going forward, with more investments. More ambitiously, the Saudis will aim to position themselves as the Chinese investment hub into the African continent. There is even speculation that the Kingdom is considering moving its oft-delayed Saudi Aramco IPO to a Hong Kong listing rather than New York or London.

Beyond that, economic and diplomatic headwinds will make MBS all the more likely to take steps to stabilize the volatile Middle East rather than ratchet things up in an attempt to better position the Kingdom. That will mean a concerted effort by the Saudis to draw down the war in Yemen, to start repairing its estranged relationship with Qatar, to accept the reality that Bashar Assad won the war in Syria, and to avoid direct confrontation with the Iranians.

“Our culture is very compatible with the Chinese culture. We have sent hundreds of our students to study in China, and when they came back speaking Chinese, it makes thousands of Saudi people understand how great China is and how wonderful the Chinese people are. We need more of that,” Khalid bin Abdulaziz Al-Falih, Saudi Arabia’s Minister of Energy, Industry and Mineral Resource.

Money may not be able to buy you love, but it sure does buy political goodwill.

Now THAT’S how you do a pivot to Asia

The original version of this story incorrectly identified McKinsey as the author of Saudi Arabia’s Vision 2030 report. The consulting firm did not author the report. 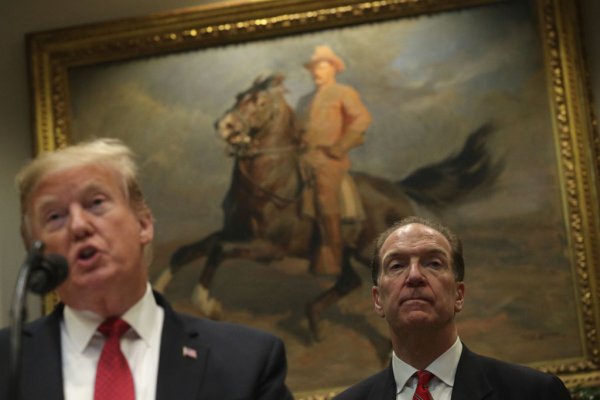 The Quick Read on Trump's Controversial Pick for World Bank Chief
Next Up: Editor's Pick