The U.S. Sent Its Most Advanced Fighter Jets to Blow Up Cheap Opium Labs. Now It's Canceling the Program

An Afghan farmer harvests opium sap from a poppy field in the Chaparhar district of Nangarhar province on April 19, 2016.
Noorullah Shirzada—AFP/Getty Images
By W.J. Hennigan

After hundreds of airstrikes failed to curtail the Taliban’s $200 million-a-year opium trade, the U.S. military quietly ended a yearlong campaign that targeted drug labs and networks laced around the Afghan countryside.

The end of the operation, code-named Iron Tempest, comes as Trump Administration officials engage in direct peace talks with Taliban leaders that could end the 17-year-old war.

Since then, U.S. and Afghan warplanes have launched more than 200 strikes aimed at disabling Taliban narcotics production, processing, trading and transportation networks. Yet the drug trade thrived. So, over time, the U.S. halted the number of air raids. Only two strikes took place over the last three months of 2018, which marked the end of the campaign, according to the latest Defense Department Inspector General’s report.

The military’s strategy became the latest high-priced failure to slow endemic poppy cultivation and drug trafficking in Afghanistan. The U.S. has spent $8.9 billion in U.S. counter-narcotics efforts since 2001, yet the war-torn country has consistently produced about 85% of the world’s illicit opium supply.

In total, the air campaign barely dented the drug enterprise. The strikes denied the Taliban an estimated $42 million, while denying about $200 million to “those involved in the illegal drug trade in Afghanistan,” according to a Special Inspector General for Afghanistan Reconstruction (SIGAR) report published in January. However, the U.S. government watchdog said it’s difficult to determine financial impact with any certainty because “no ground verification takes place to weigh and assess the amounts of the precursors or products actually destroyed by an airstrike.”

Meanwhile, opium production in Afghanistan hit record highs over the past two years. The U.N. reported 1,015 square miles of net poppy cultivation in 2018, resulting in 6,400 tons of opium production. That’s more than double than when the U.S. invaded in 2001. Narcotics trafficking is so pervasive that senior Afghan security leaders and provincial authorities often control drug networks in the country’s western, southwestern and northern regions, SIGAR said.

For many years, opium syrup derived from Afghanistan’s vast poppy fields was smuggled into other countries to be processed into heroin or morphine. Now much of that refinement takes place in crude facilities around Afghanistan. The Taliban, which once forbid poppy cultivation before being toppled from power by the U.S. in 2001, seized upon the drug market. Opium trafficking is estimated to make up 65% of the Taliban’s income, according to U.S. officials.

Much of the expansion centers in southern Helmand Province, where opium production and the Taliban insurgency thrives. The U.N. found the Taliban had thoroughly tapped “into the supply chain at each stage of the narcotics trade” by collecting a 10% tax on opium cultivation from farmers and acting as “the major guarantors for the trafficking of raw opium and heroin out of Afghanistan.”

Gen. John W. Nicholson, former top U.S. commander in Afghanistan, was eager to choke off the flow of revenue when he rolled out the new counter-narcotics air campaign on Nov. 20, 2017. He said it a represented an element of President Donald Trump’s more aggressive strategy in Afghanistan, which included loosened American forces’ rules of engagement. He played aerial video footage that showed F-22 stealth fighters and B-52 strategic bombers dropping multiple 250 and 500-pound bombs on non-descript buildings.

“These are a demonstration of our new authorities,” Nicholson told reporters at the Pentagon. “They’re also a demonstration of our will to take the fight to the enemy in all of its dimensions. And specifically, in striking northern Helmand and the drug enterprises there, we’re hitting the Taliban where it hurts, which is their finances.”

The idea for the campaign was borrowed from the battle against ISIS, in which daily airstrikes eviscerated the militants’ black market oil smuggling operation. But the results in Afghanistan never got close to repeating such success.

Taliban “drug labs,” after all, are often nothing more than a stove, barrels and precursor chemicals in a hut. They are cheap and take three days to rebuild, and represent a small component of the sprawling drug trade.

David Mansfield, a senior fellow at the London School of Economics who studied opium production in Afghanistan for two decades, published a searing 27-page examination of U.S. military’s claims. “With regard to the airstrikes impact on Taliban’s finances the effect would appear to be negligible at best,” he wrote. “In fact, the 50 barrels of opium cooking at the time of the strike that General Nicholson referred to as being worth ‘millions of dollars’ would have been worth at most $190,750 if converted to heroin and no more than $2,863 to the Taliban.”

Meanwhile, senior Pentagon officials were asking why high-end F-22 fighters, which were designed to defeat the most advanced jets in an aerial combat and costs more than $35,000 per flight hour, were being used to blow up rudimentary opium stills. “We should not be using an F-22 to destroy a narcotics factory in Afghanistan,” Air Force Secretary Heather Wilson said last February.

When Gen. Austin “Scott” Miller took over as commander in Afghanistan in September, he developed a strategy that hinges on increasing the tempo of airstrikes and raids on Taliban leadership in order to force them to make a deal at the negotiating table. U.S. Special Representative for Afghanistan Reconciliation Zalmay Khalilzad has met with Taliban officials on a potential peace deal that could ultimately lead to the conditional withdrawal of U.S. and allied troops.

“All of our efforts are aimed at setting conditions for a political settlement and safe guarding our national interests,” said Col. Dave Butler, top spokesman for the U.S.-led mission in Afghanistan. “The grand majority of our strikes are lethal strikes against the Taliban or ISIS.”

The military said the counter-drug air campaign created “insurgent confusion, concern, and changes to their tactics, techniques, and procedures.”

Despite the end of Operation Iron Tempest, the U.S. will continue to pursue other counter-narcotic programs along with the Afghan government. However, the path forward is now unclear. Afghan President Ashraf Ghani has decided to disband the country’s Ministry of Counter Narcotics as part of larger efforts to consolidate several ministries. The U.S. State Department told SIGAR that consolidating the ministry’s responsibilities into the other ministries “should have minimal effect on programs.” But the watchdog had a note of caution: “The fight against illicit narcotics does not appear to be a consistent priority either for the international community or the Afghan government.”

“To put it bluntly,” SIGAR has said, “these numbers spell failure.” 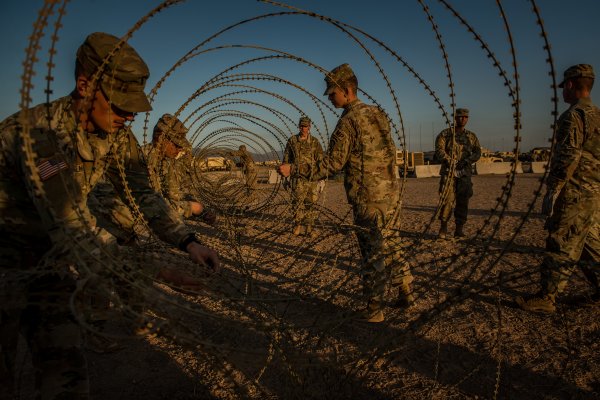 Pentagon Sends Troops to Border as Trump Raises Fears
Next Up: Editor's Pick