'Flying Bulldog.' People Are Understandably Abuzz About the World's Biggest Bee Returning After Disappearing 38 Years Ago

A beekeper's colony buzzing with bees stands next to a field of flowering rapeseed on May 12, 2017 near Muncheberg, Germany. Rapeseed, which is harvested to process its oil, is among the main agricultural products in the state of Brandenburg. Germany is the world's fifth largest producer of rapeseed. (Photo by Sean Gallup/Getty Images)
Sean Gallup—Getty Images
By Melissa Locker

While you would think it would be hard for a bee the size of a thumb to go missing, Wallace’s giant bee did just that. The jaw-dropping giant disappeared for 38 years and scientists and bee lovers were convinced it had gone extinct like so many other insects. Luckily, they were wrong. The world’s largest bee—the Wallace’s giant bee or Megachile pluto—has been rediscovered, minding its own beeswax on Indonesian’s North Moluccas islands.

The bee’s disappearing act was foiled by an intrepid and determined search team of North American and Australian biologists who wanted to figure out once and for all whether the bee still existed. The Guardian reports that the scientists found the answer in a termite’s nest in a tree, where a single female Wallace’s giant bee had set up a home. The bee, which photographer Clay Bolt described as a “flying bulldog” calling the entire experience of snapping the first photo of the newly-rediscovered bee “absolutely breathtaking”, which is exactly what someone who saw a flying bulldog would say. The bees live up to their reputation. The females can grow up to four centimeters long and have a wingspan of 2.5 inches. “It’s just ridiculously large,” Simon Robson, a biologist at the University of Sydney in Australia and a member of the expedition, told The New York Times.

The giant bee has always been reclusive. It was first documented in 1858 by British explorer and naturalist Alfred Russel Wallace (he helped Charles Darwin come up with the theory of evolution) and was then not seen again until 1981, Bolt writes in a blog post. It’s been playing hide and seek ever since. Bolt teamed up with entomologist Eli Wyman and convinced Global Wildlife Conservation, a nonprofit group that sends out search parties to hunt for “lost” species — animals that haven’t been spotted in at least a decade— to add Wallace’s Giant Bee to their list. They collaborated with Robson and Canadian-born writer Glen Chilton to track down the elusive monster bee—and they succeeded. Don’t worry there are plenty of other lost animals to find, including the Pink-Headed Duck, the Fernandina Galápagos Tortoise, and the Namdapha Flying Squirrel.

While the bee has once-again been found, it’s hard to say how long it will stay. Currently there is no protection for the bee’s habitat, which is threatened by deforestation for agricultural purposes, meaning that while Wallace’s giant bee isn’t extinct yet, it may be in the not-too-distant future. 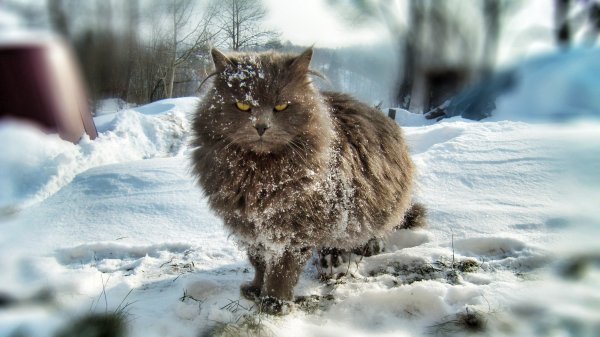 Frozen Revived Cat Really Proved She Knew How to 'Deal With it.' But How Did Fluffy Survive?
Next Up: Editor's Pick