Even if you’re one of the biggest Duke basketball haters on the planet — we’re aware there are many of you — there was only one proper response to what transpired 33 seconds into Wednesday night’s clash between Duke and North Carolina at Cameron Indoor Stadium in Durham, N.C. And that’s utter sadness.

Duke freshman Zion Williamson is what I (somewhat stupidly?) call a “no sandwich” player. As in, don’t go fixing a sandwich in the kitchen while this guy’s on TV in your living room. Williamson’s an athletic freak, liable to leap over an entire zone defense for a post-ready slam. He’s supremely skilled, entering the game against UNC averaging 22.4 points and 9.2 rebounds per game, while shooting a ridiculous 68% from the field.

“No sandwich” players don’t come through college basketball that often. Kevin Durant was another one, at Texas, more than a decade ago. So when Williamson’s left foot tore through his Nike shoe early in Wednesday’s game, causing his knee to awkwardly buckle, basketball fans shuddered at the idea that an injured Williamson would have to miss this rivalry game, and maybe much more — especially as he’s considered a top prize in the upcoming NBA draft lottery.

Williamson might be fine — he walked off the court on his own accord, and early reports indicate that the shoe explosion caused just a mild knee strain. But no matter how many games Williamson does or doesn’t miss, the incident served as an all-too useful reminder that one key part of basketball’s business model needs serious fixing.

The Duke star was NBA-ready right out of high school. Williamson should have had the option to get drafted, and lock up a multi-million dollar NBA contract — not to mention lucrative shoe and other sponsorship deals — last June. But ever since the NBA instituted an age restriction in 2006, players have needed to be at least 19 (and one season removed from high school graduation) to be draft-eligible. Back then, the NBA was concerned that too many high school players unprepared for the pros were entering the league. So that means elite prospects like Williamson have essentially been funneled into college for a year, creating a class of “one-and-done” college sports stars who try to win an NCAA title before bolting school for the pros after freshman year.

To be fair, Williamson didn’t have to play for Duke. He could have just sat out his year before the draft, worked to improve his game, and minimized his injury risk. But college ball offers benefits beyond pure economics. Who wouldn’t want to star for Duke? Playing in front of the rabid Cameron Crazies, against bitter rival North Carolina, in front of a rapt national TV audience can be a unique, treasured life experience for an 18-year-old like Williamson. In fact, Williamson has said he would have played college basketball even if he could have shot straight from high school to the NBA.

“I always knew I would go to college,” Williamson recently told NCAA.com. “Even if they would’ve had the NBA rule, I still would’ve came to college. You’re never going to get this experience again. Once you go to the league, it’s grown men, kids, families. It’s not just teenagers having fun. It’s business then.”

Let’s take Williamson at his word. If he indeed would have skipped instant millions for a year of college, you have to respect that personal decision. But that doesn’t mean he, and others like him, shouldn’t have the option to do otherwise. Kobe Bryant and LeBron James didn’t play for Duke — or any other college team — and they turned out just fine heading straight from high school to the pros. And what’s worse, Williamson, and others like him, not only can’t join the NBA right away, but thanks to NCAA amateurism rules, they can’t receive compensation, either — all while fueling the mighty economic engine of college sports. Wednesday night, countless entities were making big money off the Zion Williamson spectacle: ESPN. Duke. North Carolina. Whoever drove Barack Obama to Cameron (Williamson draws both former presidents and the best players on the planet to his games.)

What did Williamson get out of it? A busted Nike shoe and potential for career jeopardy.

Indeed, the shoe incident was stunning. Nike, a company with some $133 billion in market cap that’s accrued millions in brand value thanks to its sponsorship of Duke basketball — but cannot compensate the generational talent creating a chunk of that value for the company — could have played a role in damaging Williamson’s career, thanks to a questionable product. Nike’s stock is down about 1% as of midday Thursday. “We are obviously concerned and want to wish Zion a speedy recovery,” Nike said in a statement. “The quality and performance of our products are of utmost importance. While this is an isolated occurrence, we are working to identify the issue.”

No matter the timetable of Williamson’s return, Wednesday night’s injury is the indelible image of this college basketball season. First, the exploding sneaker. Next, we might witness the exploding knee. No teenage athlete should ever forget it. 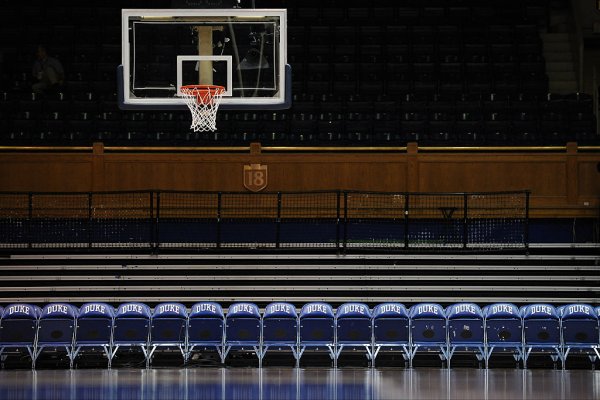