Jussie Smollett Staged Hate Attack Because He Was Unhappy About His Salary, Police Say

Empire actor Jussie Smollett staged a fake hate crime attack on himself because he was unhappy about his pay on the hit Fox show, Chicago police said Thursday.

The actor turned himself into police early Thursday after he was charged Wednesday night with felony disorderly conduct in filing a false police report. He was released Thursday afternoon after posting a $100,000 bond set at a hearing earlier in the day.

“The stunt was orchestrated because he was dissatisfied with his salary,” Chicago Police Superintendent Eddie Johnson told reporters in a Thursday morning news conference. “Jussie Smollett took advantage of the pain and anger of racism to promote his career.”

“I just wish that the families of gun violence in this city got this much attention,” Johnson said, looking at the crowd of reporters who had gathered for the press conference.

It’s the latest twist in a case that began with an outpouring of sympathy for Smollett after the initial reports of the incident surfaced.

Smollett, who is black and openly gay, told police he was the victim of a hate crime, claiming on Jan. 29 that two people yelled homophobic and racist statements at him, beat him, threw bleach on him and put a noose around his neck. Among the things Smollett said the attackers shouted was “this is MAGA country,” a reference to President Donald Trump’s Make America Great Again campaign slogan.

Smollet’s story received tremendous media attention and support from the public, including condemnations of the attack from House Speaker Nancy Pelosi, Sen. Kamala Harris and Trump. The support quickly turned to skepticism as certain portions of Smollett’s account were found to be inconclusive. A pair of Nigerian brothers apprehended in the investigation were let go without charges. Police said phone records they had received from Smollett did not help them in the case and the actor had wanted to capture the attack on a camera that was pointed in the wrong direction.

The staged attack lasted 45 seconds and was out of view of the surveillance camera that Smollett had believed would capture the encounter, according to prosecutors. Smollett instructed the two men to appear to attack him near his apartment. He told them to not bring their cell phones along and to put a rope around his neck and yell “This is MAGA country.” Prosecutors said one of the brothers was close friends with Smollett and said he provided him with “Molly,” also known as ecstasy or MDMA.

Last Thursday, Smollett said he’d been “forever changed” by the alleged attack and spoke out against people who claimed his story was a hoax in an appearance on ABC’s Good Morning America.

“It’s not necessarily that you don’t believe that this is the truth. You don’t even want to see the truth,” he said.

Johnson said on Thursday that Smollett had paid the two men $3,500 by check to stage the attack after he sent himself a letter with racist and homophobic language in order to gain attention.

“This publicity stunt was a scar Chicago didn’t earn and didn’t deserve,” he said. “Our city has problems, we know that. But to put the national spotlight on Chicago for something that is both egregious and untrue is simply shameful.”

Representatives for Smollett did not immediately comment. His lawyers did not respond to a request for comment Thursday, but issued a statement saying that they plan to mount an “aggressive defense.”

They added that Smollett “enjoys the presumption of innocence, particularly when there has been an investigation like this one where information, both true and false, has been repeatedly leaked,” according to the Associated Press.

“We understand the seriousness of this matter and we respect the legal process,” read a statement from 20th Century Fox Television and Fox Entertainment. “We are evaluating the situation and we are considering our options.”

The case has been seized upon by conservatives and in right-wing media. Donald Trump Jr. tweeted several times about what he called a “disgusting hoax,” and claimed Wednesday that it’s “only a matter of time” before Smollett’s actions are blamed on “America” and “society.” The National Review posited that Smollett’s hoax is “symptomatic of America’s illness,” claiming people should have been skeptical from the start. Elsewhere on Twitter, Trump supporters asked if Smollett himself should be charged with a hate crime.

And though President Trump had condemned the attack after it was first reported, he jumped into the fray on Thursday to accuse Smollett of insulting his supporters. 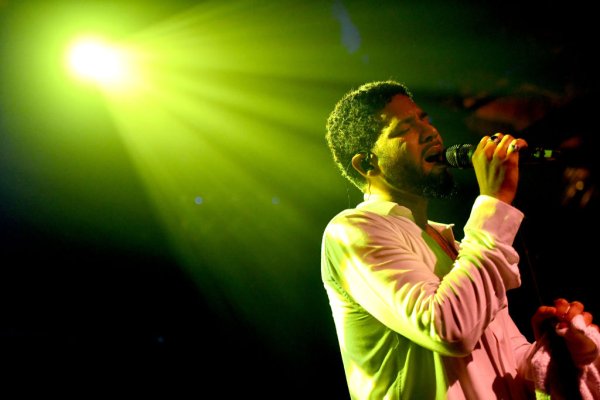