Lisa Byrd, 57, was charged with 12 counts of endangering the welfare of a child, driving while impaired and possession of drug paraphernalia.
Newark Department of Public Safety
By George Steer

A school bus driver in New Jersey overdosed on heroin, causing her to pass out and crash a bus carrying 12 special-needs students, police said.

Lisa Byrd, 57, was driving the bus through Newark when she crashed into a tree on Wednesday. None of the children, who range in age from 5 to 13 and were from the 14th Avenue School, sustained serious injuries.

Officers arriving on the scene found drug paraphernalia inside the bus, police said. Byrd was given Narcan – a medication used to block the effects of opioids – to revive her. She was later taken to University Hospital for treatment.

“Endangering the lives of Newark children is something we will not tolerate,” Newark Mayor Ras Baraka said. “We are grateful that none of the students were injured and that no other residents were harmed due to this incident.”

Newark Public Safety Director Anthony F. Ambrose expressed his gratitude to local police officers and reiterated the danger of driving under the influence.

“I’m pleased that members of the Newark Police and Fire divisions along with EMS quickly responded and assessed that all the children were safe and unharmed,” he said in a statement. “Driving while impaired is dangerous enough, but adding children to the situation is particularly irresponsible and heinous.”

Byrd, a driver of F & A Transport in East Orange, was charged with 12 counts of endangering the welfare of a child, possession of drug paraphernalia and driving while impaired.

Officials said Byrd’s driver’s license was suspended from 1996 to 2006 without specifying why it was revoked. 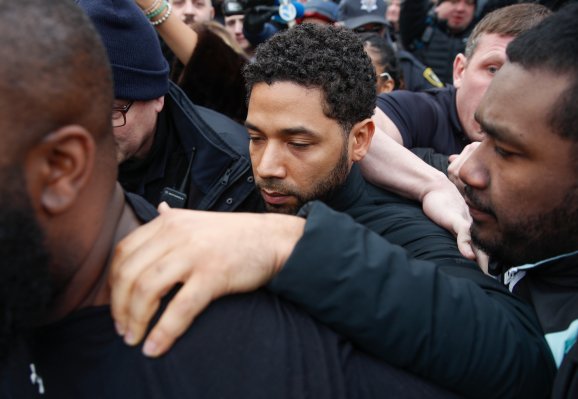 Jussie Smollett Staged Hate Attack Because He Was Unhappy About His Salary, Police Say
Next Up: Editor's Pick