'Honest Babe.' People Are Having a Hard Time Keeping It Together Thanks to This Chiseled Abraham Lincoln Statue

Chemistry is powerful and sometimes it hits you from a place you least expect it.

On Wednesday evening, that place was the Los Angeles Federal Building, where someone captured and shared the internet’s latest object of desire – a youthful eight-foot tall statue of Abraham Lincoln that’s been on display since 1939.

In this irresistible depiction, casual Honest Abe strikes a pose sans shirt and sans shoes, holding a book in one hand, clutching the top of his low-slung trousers in the other, emanating beams of confidence. It’s abundantly clear from his Indiana limestone and arms and granite rock hard abs that this statue is portraying a guy who worked out.

The Young Lincoln statue first made its splashy debut at the New York World’s Fair in 1939, but as one astute Twitter user who loves art history points out, it’s never too late to be reminded of its existence.

“Reminder that the Los Angeles federal courthouse has a statue of Abraham Lincoln where he’s a shirtless young stud suggestively tugging at his waistband like a Sports Illustrated swimsuit model,” Zack Stentz wrote.

What is a sexy statue of Abraham Lincoln even doing here?

A student artist by the name of James Lee Hansen dreamed up the sculpture for a public art contest, which he won handsomely.

“The biggest success story in modern sculpture is the story of James Lee Hansen of Los Angeles who is now carving an 8-foot statue of young Abraham Lincoln,” LIFE magazine reported at the time in the text accompanied by a photo of the artist beside the statue. (The artist used himself as a model to sculpt the masterpiece, and wore short shorts and trendy sunglasses for the picture.)

“Well, from a sculpturing standpoint, it’s better to show the body without any clothes. That’s why I left ’em off,” Hansen explained at the time, according to the Public Art Archive. People see your point, Hansen.

The budding Rodin lived hard and he worked hard, earning a whopping $7,200 for his swole depiction of the 16th president. He purchased a car with his winnings, crashed it, and spent 18 days in jail, according to LIFE.

Though it’s not clear where his artistic ambitions took him after he cut this considerable figure, Hansen is still making his mark 80 years later.

All the “Gettysburg Undress” and “honest abs” jokes the internet can handle are rolling in. And yes, there’s already been fan fiction about the statue circulating that interested parties can Google because the statue has gotten viral attention before. 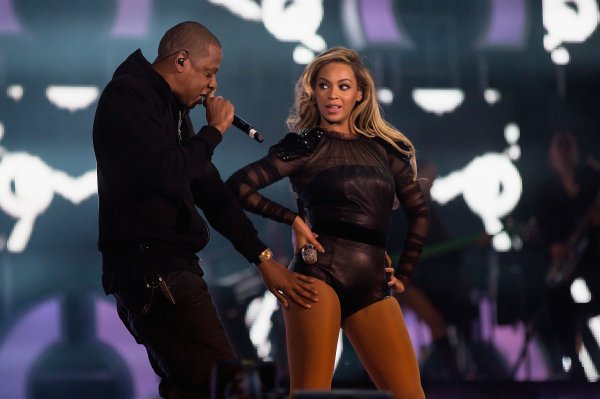 Little Girl Dancing to Beyoncé With a Corn Dog Is Pure Joy
Next Up: Editor's Pick