A portrait of the McConville family in the home of Helen McKendry, daughter of Jean McConville (left), a widowed Belfast mother of 10 who was killed in 1972.
Tom Jamieson—The New York Times/Redux
By Melissa Chan

After four years researching one of the most notorious killings in Northern Ireland’s history, New Yorker staff writer Patrick Radden Keefe made a shocking discovery that may have actually solved the crime. His new book, Say Nothing, claims to unmask the person who fatally shot Jean McConville, a widowed mother of 10, in 1972 during the sectarian conflict known as the Troubles.

Why did this case intrigue you? The idea that you could look at this one act, this one murder, and at the way in which it tied together a handful of desperate characters who were both victims and perpetrators–and then the way in which it continued to reverberate over the decades–seemed like an opportunity to tell an intimate story that hopefully can also tell a larger story about the course of the Troubles.

In the book, you describe discovering the identity of the killer by matching up a seemingly unimportant detail mentioned by two people over the course of your research. What did that moment feel like? I’ve been doing this now, reporting and writing, for the better part of two decades, and I’ve never had an experience quite like that. It took my breath away. The strangeness of it was that I wasn’t looking for that answer. I was finishing the book, and to me it didn’t feel like there was any nagging sense of Oh boy, we have to figure out who the shooter is. [But] the part of me that cares about truth and accountability is happy to be naming somebody who hadn’t been associated with this before and who created a lot of misery for the family.

Were you trying to pass along a message about human dignity? You could argue there are a few heroes in the book, in pretty minor roles, but I’d say there aren’t any unequivocal villains. I really wanted to look at this conflict in the way in which it took ordinary people and thrust them into very extreme situations, and look at the things they did in the heat of the moment and the way they felt about those actions when they looked back at them. Part of what was interesting to me was the astonishing resilience of people who have passed through this unbelievable crucible in history.

Why tell this story now? It is a history story, but that history continues to be so explosive in the present day. It was an opportunity to collapse the past and the present. 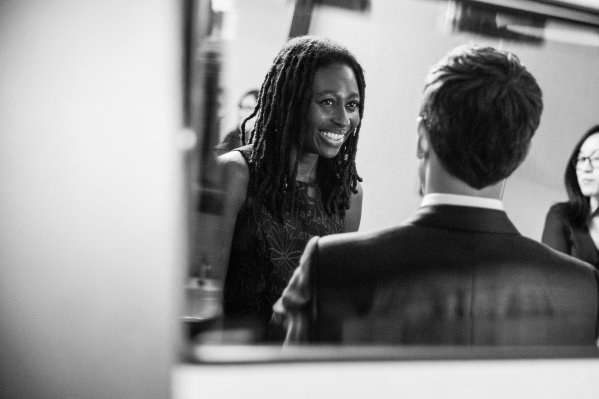 Gingerbread Is a Twisty Take on Old Tales
Next Up: Editor's Pick