Joaquin “El Chapo” Guzman’s defense lawyers plan to seek a retrial for the recently convicted kingpin following a report that multiple jurors violated a judge’s orders and then apparently lied about it. The alleged and so-far-unverified misconduct claim Wednesday could threaten to undo the results of the three-month federal trial.

According to Vice News, a juror came forward anonymously to describe what it was like to sit on the historic trial, which ended last week in federal court in Brooklyn with a guilty verdict on all charges.

Vice reported that the juror dropped a bombshell in the interview by saying at least five members of the jury routinely read about the trial, in news reports and in social media, despite daily admonishments by Judge Brian Cogan not to do so.

Every day of the trial ended with the judge strictly telling the jurors not to discuss the case or do any research on it after they leave the courthouse. If the jurors ignored the judge’s orders, they may have been exposed to prejudicial and uncorroborated allegations that weren’t allowed to be submitted as evidence, including news reports that Guzman had drugged and raped girls as young as 13.

“You know how we were told we can’t look at the media during the trial? Well, we did. Jurors did,” the juror reportedly told Vice. “The judge said, ‘You can’t talk about the case among each other,’ but we broke that rule a bunch of times.”

Guzman’s defense team blasted the jurors’ alleged misconduct, calling the issues raised in the news report “deeply concerning and distressing.” Attorney Jeffrey Lichtman, one of Guzman’s attorneys, told TIME the jurors who broke the rules “may have been in contempt of court for their actions.”

“We will be filing a motion for a new trial I suspect sooner rather than later,” he said, adding that he was in the middle of doing the legal research.

“All we ever wanted for Mr. Guzman was a fair trial and that’s all we deserved,” he said in a more detailed statement. “We will continue to seek justice for him.”

If the defense team files a motion for a retrial, it will be up to the judge to decide whether he will summon all 12 members of the jury back into the courthouse for a hearing to determine whether the claims in the news report were true and whether the verdict was tainted.

The U.S. Attorney’s Office for the Eastern District of New York, which prosecuted the case, declined to comment.

Duncan Levin, a former federal prosecutor with the Justice Department, said he believes the judge will summon the jurors back to discuss their alleged misconduct. However, he said, the court would not lightly overturn the verdict, since it was a highly prominent trial.

“If this happened in any other case, I think it would be a no-brainer to have an evidentiary hearing into whether the jurors committed some kind of misconduct,” he told TIME. “Here, of course, this is one of the most hated and feared defendants in the world. A lot of time and money and effort have gone into the trial. I can see the court being extremely reluctant to overturn the verdict.”

If an evidentiary hearing is planned, it’s unclear also whether the jurors will lawyer up, possibly delaying the process. “There are a lot of what-ifs here,” said Levin, who specialized in money laundering and asset forfeiture. “This could snowball.”

Wednesday’s El Chapo bombshell is the latest twist in Guzman’s trial, which was packed with drama since it began in November. After the verdict was handed down, the judge praised the jurors for their diligence during deliberations in a direct address, moments before dismissing them for the last time. Cogan told them the way they carefully and methodically considered each count in the indictment made him “proud to be an American.”

During the course of the trial, prosecutors had put 56 witnesses on the stand to show Guzman was a ruthless murderer who regularly resorted to violence and corruption to build and defend the multi-billion dollar criminal enterprise he led. Last Tuesday, in the sixth day of deliberations, the eight women and four men on the jury found Guzman guilty of all charges stemming from his role in trafficking billions of dollars worth of drugs into the U.S. as a top boss within the Sinaloa cartel.

Guzman—perhaps most famous for escaping two top-security Mexican prisons—faces life behind bars in the U.S. His sentencing is set for June. 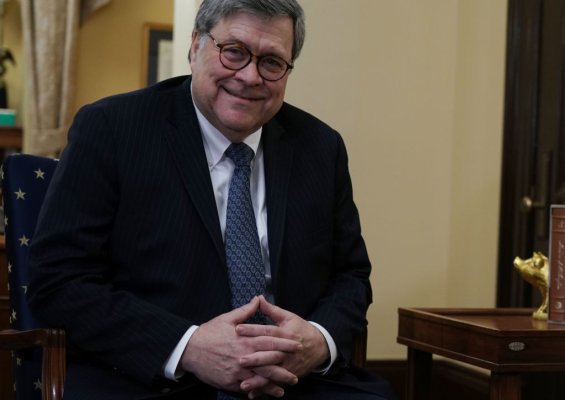 William Barr Controls Who Will See the Mueller Report
Next Up: Editor's Pick