A Foldable Smartphone, AirPod Rivals, and More. These Are the 4 Biggest Things Samsung Just Announced

During its annual Unpacked event on Wednesday, Samsung unleashed a bounty of new smartphones and other gadgets, including a pricey foldable phone called the Galaxy Fold, the Galaxy Buds (a rival to Apple’s wireless AirPod earbuds), and the Galaxy Fit, a fitness band.

Here are the four biggest announcements from Samsung’s 2019 Unpacked event.

Samsung opened the Unpacked event by introducing a new smartphone design — though one it had been teasing since last year.

Called the Samsung Galaxy Fold, the device is a folding smartphone that opens and closes like a book. On the outside “cover” is a 4.6-inch display, while inside, when opened, you can use the 7.3-inch Infinity Flex display as a singular massive screen to multitask, watch video, or do whatever else you normally would on your smartphone. Apps can switch between the smaller and larger display without interruption, and the six (yes, six) cameras on the Galaxy Fold will ensure you’re always able to snap a photo.

Samsung says the Galaxy Fold will be available in the second quarter of 2019 on T-Mobile and AT&T, starting at $1,980.

A Quartet of Galaxy S10 Smartphones

One of the worst-kept secrets when it comes to smartphone launches, Samsung finally announced its Galaxy S10 line of devices. In case you weren’t already confused by Samsung’s growing catalog of smartphones, the S10 line includes four different models: The Galaxy S10e, Galaxy S10, Galaxy S10+, and Galaxy S10 5G.

The $749.99 Galaxy S10e is the cheapest of the four, and the most compact of the bunch. The S10e features a 5.8-inch screen, two rear cameras, and a front-facing camera that looks like the S10e had a run-in with a hole punch machine. The camera, embedded in the corner of the display, helps maximize screen size and eliminate the dreaded notch.

The $899.99 Galaxy S10 packs more features into a slightly larger device. The 6.1-inch screen features the same front-facing camera on the S10e, while its triple-camera setup on the rear allows for wide-angle, ultra wide-angle, and 2x optical zoom images.

The $999.99 Galaxy S10+ features a 6.4-inch display, larger than the previous Galaxy S9+. It also has the same triple-camera setup on the rear as the Galaxy S10, but on the front is a pair of cameras allowing for depth-sensing selfies and facial recognition for unlocking your device. It also supports up to 1.5TB of storage, even more than some laptops.

Samsung, in its push to promote faster 5G wireless broadband technology, also announced the Galaxy S10 5G, the only S10 device to support 5G speeds. In keeping with its status as a mobile powerhouse, the S10 5G features not three but four rear cameras, with the extra one functioning as a depth sensor for adjustable portrait mode images and improved augmented reality experiences. It also has a gigantic 6.7-inch display, and 256GB of internal storage (though it’s lacking a microSD slot, present in every other S10 variant).

Hidden below the screen in the Samsung Galaxy S10, S10+, and S10 5G is an ultrasonic fingerprint sensor. Able to create a 3D scan of your finger, the sensor is more secure than earlier capacitive sensors, Samsung says. And since it’s underneath the screen, you won’t notice it when you’re not using it. According to Samsung, certain screen protectors may alter the effectiveness of the ultrasonic fingerprint sensor; the company is working with manufacturers to create screen protectors designed for the S10 line.

You’ll be able to purchase three of the four S10 devices beginning March 8, with the S10 5G debuting exclusively on Verizon “for a limited time in the first half of 2019,” and on other carriers this summer. The Galaxy S10, Galaxy S10+, and Galaxy S10e will be available in four different colors, with two additional colors available when purchasing the 512GB or 1TB Galaxy S10+ variants.

Samsung’s third attempt at truly wireless earbuds, the $129.99 Galaxy Buds are the company’s best-looking iteration yet. The Galaxy Buds, made in collaboration with Samsung subsidiary AKG, feature ambient sound support, meaning you can stay aware and attentive to your surroundings even with your earbuds in. With built-in Bixby support, you can use the Galaxy Buds to issue commands to Samsung’s voice assistant.

Samsung says the Galaxy Buds will last up to six hours when streaming music, with its case adding another seven hours of battery life to the mix. That case also supports wireless charging, and can draw power from your S10 device using Samsung’s most intriguing addition to the S10 line. If you play your cards right, you might never have to plug in your Galaxy Buds. More on that below…

Samsung’s wireless PowerShare is perhaps the most intriguing feature found in the Galaxy S10 lineup, letting you charge Qi-compatible devices wirelessly using the back of your S10 device. Every S10 supports Wireless PowerShare, but the bigger the device, the more power you’ll have at your disposal. With phones like the S10+ and S10 5G boasting hefty batteries, you’ll be able to use your device to give your friend’s Qi-compatible smartphone a little juice to get through the day, or recharge your Galaxy Buds while you’re eating lunch. It’ll even charge iPhones supporting wireless charging, like the iPhone 8 or XS Max. 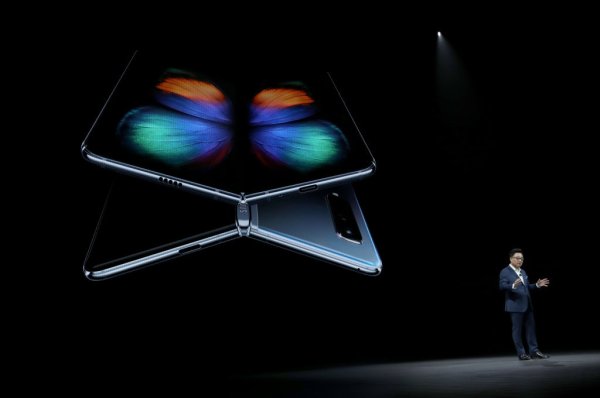 Samsung's New Galaxy Fold Smartphone Opens and Closes Like a Book
Next Up: Editor's Pick