Why Bradley Cooper Is Performing As Himself at the 2019 Oscars

Although Bradley Cooper is set to perform “Shallow” with Lady Gaga at the 91st Academy Awards, he apparently will not be singing the hit A Star Is Born song in the voice of his character, Jackson Maine.

During a February appearance on the The Late Show, Cooper — who is nominated for Best Actor —told Stephen Colbert that he has officially retired the gravelly tones of his onscreen rocker persona.

“As was revealed when I went up on stage in Vegas, I had to create a character. Because that guy certainly isn’t a rock star,” he explained, referencing his recent surprise performance at Gaga’s Las Vegas residency show. “I watched the video back…I just look like this sort of idiot from Philadelphia who’s singing with Lady Gaga…But I was like, ‘Oh, Jackson’s gone.'”

Cooper went on to confirm that he has no plans of reviving his portrayal of Jackson at the 2019 Oscars. “He’s gone. I’m not gonna try to get him back. But I will be me singing,” he said. “I hope to be present and enjoy it. And hopefully people love the song sung that night.”

Cooper and Gaga’s performance of “Shallow” is not without precedent. In fact, it follows in the Oscars ambitious instances of staging full movie scenes during the ceremony, like Madonna’s 1991 rendition of “Sooner or Later” as the femme fatale Breathless Mahoney from Dick Tracy and Beauty and the Beast star Jerry Orbach’s 1992 “Be Our Guest” spectacle. 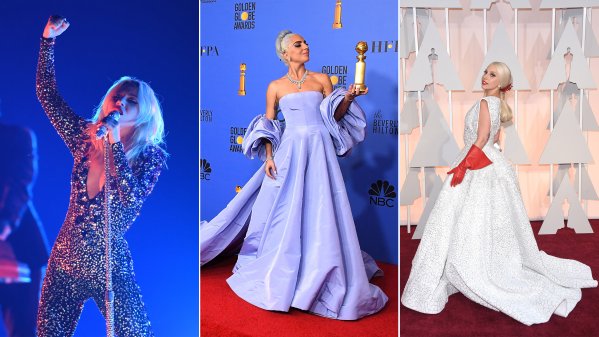 A Brief History of Lady Gaga as Queen of Awards Shows Memes
Next Up: Editor's Pick