Former President Barack Obama teamed up with Golden State Warrior star Stephen Curry to encourage the audience of young African-American men to focus on their own self-confidence as the path to true success in life.

On Tuesday, the very dynamic duo spoke at an event to mark the fifth anniversary of the non-profit My Brother’s Keeper Alliance in Oakland, California, which is funded in part by the Obama Foundation. Over the course of their conversation, Obama and Curry discussed the evolving role of men in society and cautioned against falling into old “stereotypes” of what being a man means. To demonstrate his point, Obama introduced himself to the audience as “Michelle’s husband,” referring to his wife of 27 years, Michelle Obama. He then introduced the NBA star as “Ayesha’s husband.”

The two discussed the social pressures that young men face. The Independent reported that Obama touched on inequality, saying that men can “feel we have to compensate by exaggerating stereotypical ways men are supposed to act. And that’s a trap.”

He also talked about how the images of success portrayed by most hip-hop and rap stars can perpetuate damaging stereotypes. “We live in a culture where our worth is measured by how much money we have and how famous we are,” he told the audience, the San Francisco Chronicle reported. “I will tell you, at the end of the day, the thing that will give you confidence is not that. I know a lot of rich people that are all messed up.”

He continued: “Cause I’ve got one woman who I’m very happy with. And she’s a strong woman.” The audience couldn’t help but applaud at that. 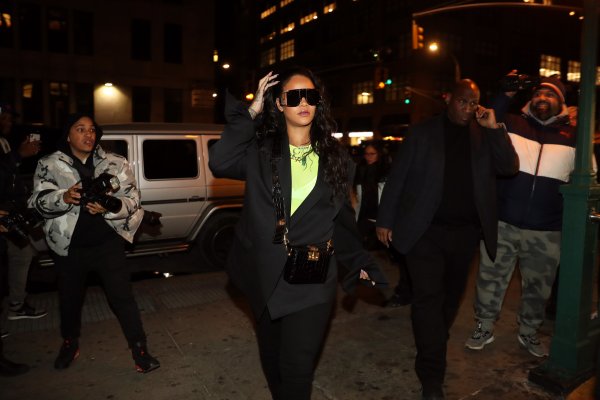 Rihanna Wore Something Cool on Your Birthday and This Internet Challenge Is Proof
Next Up: Editor's Pick