Officials are worried that a prion disease spreading among deer in the U.S. may someday threaten the health of humans.

Chronic wasting disease (CWD), which is nicknamed “zombie deer disease,” gets its name from a range of symptoms. For deer, elk and moose, these include stumbling, listlessness, drooling and rapid weight loss. The fatal disease degrades the brains, spines and bodies of the animals it infects, and there are no known treatments or vaccines.

No cases of CWD have been recorded in humans. It has not even been definitely proven that humans can be infected by CWD, though some research has suggested it’s possible. But the Centers for Disease Control and Prevention (CDC) says that as of January 2019, the disease has been reported in deer, elk and moose in 251 counties in 24 U.S. states, primarily in the Midwest. It has also been found in two provinces in Canada. While CWD is still relatively rare, infection rates among deer and elk in areas where the disease is most common have been recorded at about 10-25%, the CDC says, and rates can be especially high among captive deer. CWD was first identified in Colorado in the late 1960s.

“If CWD could spread to people, it would most likely be through eating of infected deer and elk,” the CDC says on its website. About 11.5 million Americans hunt, according to statistics from the U.S. Department of the Interior; it’s unclear how many eat the game they hunt.

CWD is related to Variant Creutzfeldt-Jakob disease, or the human form of mad cow disease, which scientists believe can be transmitted to humans by eating contaminated meat. Among animals, CWD spreads by contact with contaminated bodily fluids or tissues, or tainted food or water.

Michael Osterholm, director of the Center for Infectious Disease Research and Policy at the University of Minnesota, warned Minnesota lawmakers about the possible human threat of CWD earlier this month, NBC News reported.

“It is probable that human cases of chronic wasting disease associated with consumption with contaminated meat will be documented in the years ahead,” Osterholm said. “It’s possible the number of human cases will be substantial, and will not be isolated events.”

The CDC recommends that hunters and people who eat deer, elk or moose stay aware of where CWD has been found and heed local public health guidance. If CWD has been recorded in a given area, the CDC “recommends that hunters strongly consider having those animals tested before eating the meat.” Hunters should also avoid shooting, handling or eating meat from animals that look sick or were found dead; wear gloves while handling carcasses; and minimize exposure to the animal’s organs, the CDC says. 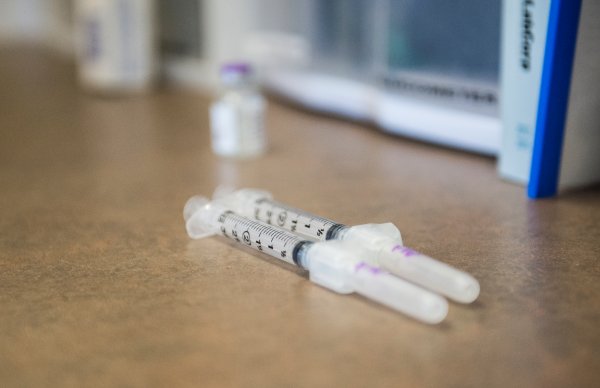 This Year’s Flu Shot Was Far More Effective Than Last Year's. Here’s Why
Next Up: Editor's Pick