What to Know About Absher, Saudi Arabia's Controversial 'Woman-Tracking' App

Absher, a government-backed mobile app in Saudi Arabia, has come under sharp criticism amid claims that it reinforces the country’s system of male guardianship — which requires women to seek approval for things like traveling and getting a job. Among the app’s many features, which include allowing Saudis to renew their driver’s licenses and request government documents online, it also reportedly gives male users the option of receiving SMS alerts when female “dependents” present their passports at a border, effectively enabling men to track and control women’s movement.

Several rights groups have called on Google and Apple to ensure Absher doesn’t facilitate the abuse of women’s rights, while some have called for it to be removed from their app stores. But many Absher users within Saudi Arabia have come to its defense, saying it’s a productivity tool that saves them hours of bureaucracy and ultimately makes travel easier for many Saudi women.

Absher is a free mobile app launched by the Saudi government in 2015. Available on the Google Play Store and Apple’s App Store, Absher is described as “the official individuals eServices Mobile Application that provide the services of Absher portal in Kingdom of Saudi Arabia,” and is listed under the “Productivity” category on both sites. The name Absher roughly translates to “good tidings” or “yes, done,” in Arabic. Users can use the app to complete day-to-day tasks such as checking their mail, registering vehicles, booking government appointments and applying for visas.

Why is it controversial?

The app allows male users to log the information of their dependents and to grant or revoke permission for them to travel at the click of a button. Specifically, male users can register women’s names and passport numbers, select how many journeys she can take and how long she can travel for, according to screenshots of the web version of the app published by Insider.

Under the male guardianship law, every woman must have approval from a male custodian in order to travel Critics argue that allowing men to grant this approval via the app normalizes and reinforces an antiquated patriarchal system. On Feb. 11, Oregon Sen. Ron Wyden wrote a letter to Sundar Pichai and Tim Cook, the CEOs of Google and Apple respectively, demanding that they take down Absher from the app stores. “It is hardly news that the Saudi monarchy seeks to restrict and repress Saudi women,” Wyden wrote, “but American companies should not enable or facilitate the Saudi government’s patriarchy.”

Human Rights Watch and Amnesty International have both urged Google and Apple to assess the app’s use to determine whether it entrenches discrimination or facilitates abuse. Dana Ahmed, Saudi Arabia researcher for Amnesty International, called it “another example of how the Saudi Arabian government has produced tools to limit women’s freedoms,” adding that giving men the ability to track women “curtails their movement and once again highlights the disturbing system of discrimination under the guardianship laws.”

Apple’s Cook told NPR last week that the company would “take a look at it.” Google also said it was “looking into it,” according to CNN.

How have Saudis responded?

The criticism has prompted backlash from some Saudis who say removing the app would disrupt their daily lives. Marwan Bukhary, a 44-year-old restaurant owner and financial consultant based in the Saudi port city of Jeddah, told TIME he regularly uses Absher to approve work visas and register the Iqama, or Saudi residence ID, for his employees. “This is a life changer app that has made our life easier,” Bukhary says. “It is e-government, we used to do everything by visiting each office and waiting in line for such service, while now we do it in the click of a button.”

Maha Alanzi, a 26-year-old Saudi woman who attends university in Australia, said the app makes travel easier for her because, under the existing guardianship system, her father must be in the same city as her to approve her departure from the kingdom. “It’s helpful especially in my situation,” she says. “I sometimes need permission from my dad and if he’s not in the same city, he needs to come to do this. But in this app, it’s easier.”

Human rights advocates maintain, however, that while the app may do away with some bureaucracy, tech firms should determine whether it is susceptible to abuse and mitigate its risks to women. Governments that offer services online could also alter problematic functions to prevent misuse. “Even though the app is more general purpose,” Rothna Begum, Middle East researcher for Human Rights Watch, said in a statement, “the government could simply remove the guardianship tracking functionality from the app, and continue to offer the rest of the functionality.” 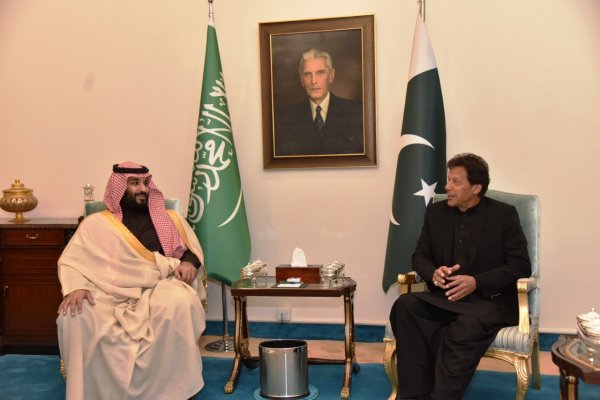 Saudi Crown Prince Signs Deals Worth $20 Billion With Pakistan
Next Up: Editor's Pick