Roger Stone Posts and Deletes Photo of Judge With Crosshairs

Embattled political consultant Roger Stone on Monday posted and later deleted a photo of the federal judge presiding over his criminal court case with a crosshairs graphic looming over her head.

Stone, a longtime Trump ally, pleaded not guilty on Jan. 29 to charges of lying to Congress, obstruction and witness tampering. Those charges arose as a result of the ongoing investigation into Russian election meddling.

In a caption accompanying the Instagram post, Stone attacked U.S. District Judge Amy Berman Jackson as an “Obama appointed judge.” Jackson was nominated by President Barack Obama in 2011 and confirmed by the Senate 97-0.

“Through legal trickery Deep State hitman Robert Mueller has guaranteed that my upcoming show trial is before judge Amy Berman Jackson, an Obama appointed judge who dismissed the Benghazi charges against Hillary Clinton and incarcerated Paul Manafort prior to his conviction for any crime,” the post said.

It also included a link for supporters to donate to his legal defense fund.

Stone’s post came just a few days after Jackson issued a partial gag order in the case, which she wrote was intended to avoid a “prejudicial effect” on the proceedings. The order would require people involved with the trial to “refrain from making further statements to the media or in public settings.”

The order also warned that if Stone continued to speak out, it could harm his case, writing, “one factor that will be considered in the evaluation of any future request for relief based on pretrial publicity will be the extent to which the publicity was engendered by the defendant himself.”

After Stone posted the photo, some wondered aloud whether the image constituted threatening a federal judge, which is a felony. 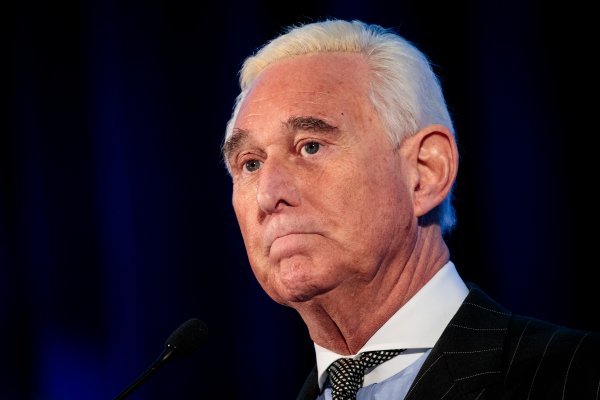 Who Is Roger Stone? Trump Adviser Arrested
Next Up: Editor's Pick