Five Americans, one Russian and a Serb were arrested in Haiti and charged with a criminal conspiracy and illegal possession of weapons, the AFP news agency said, citing Haitian police.

The group, which also included one Haitian, was arrested at a police checkpoint near the Haitian central bank with assault rifles, pistols, bulletproof vests and drones, the AFP cited the police as saying, without naming the people detained.

The U.S. embassy issued a “do not travel” alert for the country last week and ordered the departure of all non-emergency U.S. personnel and their family members as anti-government protesters burned tires, blocked roads and clashed with police.

Protests erupted on February 7 demanding the resignation of president Jovenel Moise, who has said he will not step down. Demonstrators are angry over recent corruption scandals, low wages and high inflation.

Prime Minister Jean-Henry Ceant announced in a televised address on Saturday night that the government would deepen investigations into alleged misuse of funds from PetroCaribe, a Venezuelan oil program, cut government spending by 30 percent and start talks to raise the minimum wage. 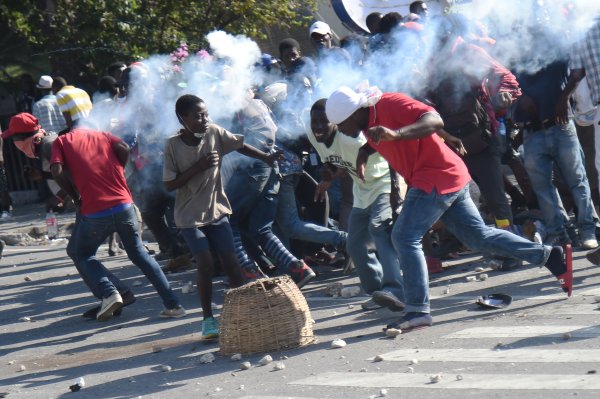 Haiti's President Says He Won't Step Down Despite Unrest
Next Up: Editor's Pick