Labour MP Chuka Umunna announcing his resignation on Feb. 18, along with a group of six other Labour lawmakers.
Stefan Rousseau - PA Images—PA Images via Getty Images
By Billy Perrigo

Seven lawmakers resigned from the U.K.’s opposition Labour party on Monday morning, in what they described as an act of protest against the party’s Brexit policy and persistent allegations of anti-Semitism, just 39 days before the country is set to leave the European Union.

The lawmakers said they supported calls for a so-called “People’s Vote,” or second Brexit referendum, which the Labour party leadership has so far refused to back.

No deal has yet been struck between the U.K. and the E.U. over Brexit, with U.K. lawmakers rejecting May’s deal and the bloc saying renegotiation is off the table. If “Brexit day” of March 29 is reached without an agreement, the U.K.’s trade and legal ties will be cut abruptly with far-reaching effects. Many businesses have already begun stockpiling essential materials to prepare for the eventuality.

Trying to get the Labour party to support a second referendum has “been like getting blood from a stone,” said Chuka Umunna, one of the lawmakers, at a press conference on Monday.

The party’s handling of allegations of anti-Semitism were also cited as a reason for the resignations, the latest blow for Labour leader Jeremy Corbyn. One of the lawmakers who resigned, Luciana Berger, is Jewish. She called the party “sickeningly institutionally racist.”

Party members have previously been investigated for bullying Berger, who is eight months pregnant. One member allegedly called her a “disruptive Zionist.” The allegations have dogged Corbyn personally since he became Labour leader in 2015. Critics have pointed to his support in 2012 of a London mural containing anti-Semitic tropes. Corbyn has repeatedly said he is not anti-Semitic or racist.

In response to the resignations, Corbyn said on Twitter he was “disappointed that these MPs have felt unable to continue to work together for the Labour policies that inspired millions at the last election.”

The lawmakers, who largely belong to the right wing of the party, will not form a new party, but instead sit as independents in parliament and vote on a case-by-case basis. They billed themselves “the Independent Group” at the Monday press conference.

Dozens more lawmakers within the Labour Party support calls for a second referendum, but many others say such a move would further polarize the electorate and fail to help the U.K. reach a workable Brexit deal.

While the vast majority of lawmakers for the Labour Party is united in its opposition to Prime Minister Theresa May’s Brexit plan, the party leadership’s official policy is to try and trigger an early general election. If that becomes impossible, the party is mandated by its official policy (voted on by members) to push for a second Brexit referendum. The question of what constitutes “impossible” has become a matter of fierce argument within the party, particularly between supporters of a second referendum and supporters of its current trajectory.

The roots of Monday’s split can be traced back to Corbyn’s unexpected election in 2015. The most left-wing party leader in a generation, Corbyn’s candidacy was not supported by most of the party’s own lawmakers in parliament. He managed to secure victory, however, because he was unusually popular among the party’s 540,000-strong membership, particularly younger members.

A grassroots organization called Momentum, set up to support Corbyn’s leadership campaign, began pushing after his victory for lawmakers critical of Corbyn’s politics to be deselected from representing the party in parliament. Many of the seven lawmakers who split on Monday had been targeted by such efforts.

Alluding to the deselection attempts, another of the resigning lawmakers, Chris Leslie, said the Labour Party had been “hijacked by the machine politics of the hard left.” Berger, the Jewish lawmaker, had also faced deselection efforts.

Labour lawmakers reacted with dismay as the news broke on Monday morning. “I’m deeply saddened to see colleagues leave the Labour Party,” said the party’s Brexit spokesperson, Keir Starmer. “We must remain united in the fight for our party’s values of internationalism and equality for all. That is the only way to bring an end to this [Conservative] government and deliver the change our country so desperately needs.” 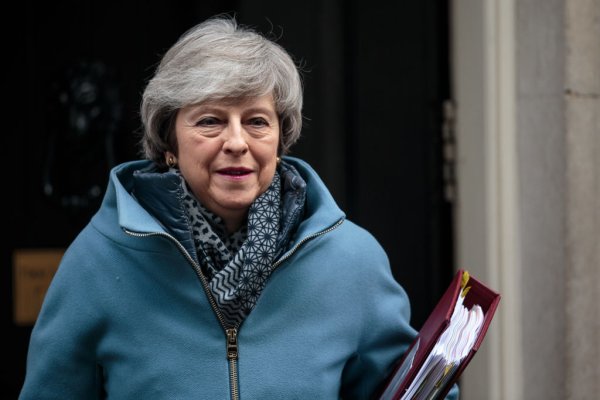 Theresa May Pleads for Brexit Plan Unity Before Talking Again With EU Leaders
Next Up: Editor's Pick