R.E.M. Lashes Out at President Trump for Mocking Democrats With 'Everybody Hurts'

Rock band R.E.M probably couldn’t predict their early ’90s hit song “Everybody Hurts” would be put to political use in 2019. When it was, they were not happy about it.

The episode began on Friday afternoon, when President Trump retweeted a video meme. The clip, created by Trump-supporting meme-maker Carpe Donktum, showed Democratic lawmakers like Senators Bernie Sanders and Kamala Harris looking stoic during the President’s State of the Union address. The video was set to R.E.M.’s “Everybody Hurts.”

R.E.M. was immediately critical about Trump’s use of their song to taunt his political opponents. The band’s official Twitter account tweeted its displeasure on Friday night, referencing the song “World Leader Pretend.”

R.E.M. bassist Mike Mills expressed his own anger at the use of his band’s song, insulting both the President and the meme account with rude language in a reaction tweet.

“Measures have been taken to stop it. @jack you need to get on this,” the musician wrote, referencing Twitter CEO Jack Dorsey.

On Saturday, Trump retweeted a similar video by the same Twitter account, this one set to “God Bless the U.S.A.” by Lee Greenwood. Greenwood performed the 1984 country anthem at Trump’s 2017 inauguration.

This is not the first run-in between the President and the highly-successful rock band. Trump used R.E.M.’s hit song “It’s the End of the World As We Know It (And I Feel Fine)” at a 2015 political rally, a move that earned swift condemnation from the band.

“We do not authorize or condone the use of our music at this political event,” the band wrote in a Facebook post following the event. They also noted that “the media and the American voter should focus on the bigger picture, and not allow grandstanding politicians to distract us from the pressing issues of the day and of the current Presidential campaign.”

R.E.M., which rose to prominence in the ’80s and ’90s, has won multiple Grammys and is the Rock and Roll Hall of Fame. The group disbanded in 2011. 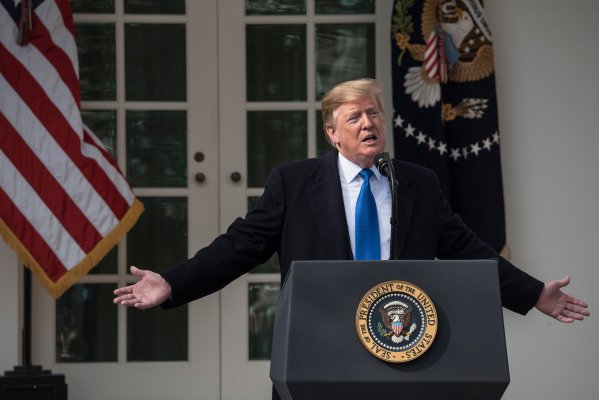