Many Americans Are Shocked by Their Tax Returns in 2019. Here’s What You Should Know

As tax season starts to heat up, people with big plans for their tax refunds may be surprised to find they are receiving less money than in years past.

The initial batch of tax refunds in the first two weeks of the season declined an average of 8.7% from last year as of Feb. 8, according to a report from the Internal Revenue Service. The average refund around the same time in 2018 was $2,135; this year, the number stands at $1,949. The changes likely stem from the Tax Cuts and Jobs Act law that passed in December 2017, significantly overhauling the tax code in the U.S. Among the changes were new tax brackets, standard deductions and expanded credits for families with children.

Changes in the new tax law could lead to confusion as people try to figure out how much they will receive in their refunds, or if they owe money to the IRS. Here’s what you should know about what’s different this year.

What changed with the tax code from last year?

Because so many pieces of the tax code shifted, it’s difficult to tell why certain people are affected differently than others, according to tax specialists and financial experts. But one place where people are likely to feel an impact comes from changes to withholding tables, which are guides that employers follow to deduct the proper amount from each employee’s paycheck for income tax. Under the new law, many people saw less money taken out of their paychecks, which has led to smaller tax refunds.

Other changes to the tax law include the implementation of higher standard deduction for single filers at $12,000 and married couples filing jointly at $24,000 and a higher child tax credit, doubling to $2,000 per child from $1,000 per child last year. The law also meant the elimination of personal exemptions and limits to itemized deductions, such as a newly introduced $10,000 cap on deductions at the state and local levels.

Those most likely to feel the impact are people who did not change how much they wanted withheld from their paychecks in their W-4 forms. Further, it’s emerged as people get ready for tax season that about half of Americans don’t understand how the new law affects their tax bracket and about 28% are unsure about what exactly shifted under the code, according NerdWallet’s 2019 Tax Study.

That lack of awareness on part of taxpayers over what to do with their forms is probably driving the lower tax refund average, says Andrea Coombes, a tax specialist and writer at NerdWallet.

“Because employers have to change their withholding tables based on the IRS’s new rules, people likely would have been enjoying more money in their paychecks over the course of the year,” she says. “That, in turn, could mean a smaller refund now.”

Who is most affected by tax changes this year?

Those most at risk for receiving less money in their tax refunds are taxpayers who itemize their deductions and have no dependents, homeowners in high tax states and employees who have unreimbursed business expenses, according to Lynn Ebel, the director of the Tax Institute at H&R Block. Families with children under the age of 17 will likely get a higher refund, she says, because the child tax credit jumped in size under the law, to $2,000 per qualifying child plus a new $500 credit for other qualifying dependents.

That the number of people who will receive lower-than-usual tax refunds will grow is quite likely, says Mark Jaeger, the director of tax development at the tax preparation firm TaxAct.

“It’s a short window [the IRS] is reporting on, but it does seem like this is going to continue for at least this year,” he says. “Not everybody is going to see a tax decrease this year, but a majority should. It comes back to withholdings calculations.”

Why do these tax changes feel so significant?

The confusion over what people may or may not receive in their tax refunds contributes to a stressful climate, according to financial psychologist Brad Klontz. Money itself is already a significant stressor for Americans, according to the American Psychological Association, which found in a 2015 survey that money is the top cause of stress in the country. That pressure gets “exacerbated around tax season,” Klontz says.

It’s still too early in the tax season to determine how many taxpayers are expected to receive a refund this year. The 2018 tax season saw about 70% of taxpayers receive a refund, according to the IRS. The average tax refund around the end of the second week of February was around $2,000 in 2017 and 2018.

“It’s the one time of year where you’re forced to look at your financial life in great detail,” Klontz says. “People have a tendency to not think about it — one way to deal with stress is to be in denial about it.”

This year could be a lot harder to deal with that stress, particularly if people receive notice that they owe taxes instead of a tax refund. Ashley Alt, an Illinois woman, told the New York Times she received a tax bill of $4,800 — far higher than the small amount she had expected to owe the IRS. Klontz says such people will feel the impact of tax season in a much more emotional way.

What can you do about the change this tax season and next?

The W-4 form allows taxpayers to tell their employers how much to take out of each paycheck for taxes. People can claim a number of allowances on the form, and the more they claim, the fewer taxes will be withheld, Coombes says.

“If you got a big tax bill this year and you don’t want another one like that, you would use form W-4 to reduce your allowances,” she says. “Instead of five, claim one or two [allowances]. That will increase your withholdings over the year, and that will help you owe less next April.”

People vary in terms of how they prefer to pay taxes and receive refunds. Some prefer to get a large chunk of money in their tax refunds, while others plan to receive $0 after having the right amount withheld all year from their paychecks, says Ebel. Others have said they prefer to owe small amounts to the IRS because they don’t want to give what they see as an interest-free loan to the government. No matter what outcome taxpayers desire, they have take steps to prepare themselves properly, according to Ebel.

Ebel says that instead of preparing, many people took the “wait and see approach” this year due to confusion over how the new tax law would affect them. At H&R Block, which helps people prepare their taxes, the company tried to educate their clients on the changes to the tax rules starting last year. There are several tools taxpayers can use to figure out what they’re paying, such as withholding calculators, or taking a deep look at what you paid in taxes in previous years.

“Taxes can be a source of panic for people,” she says. “It’s not the most fun or sexy thing to talk about or to have a good understanding of. Relying on the withholding tables was kind of a wake up call for people to be a little more proactive.”

For those who get less in their tax refunds than in years prior, Klontz suggests shifting the mindset around what the refund even means. Receiving a couple thousand dollars can feel like a bonus — many people use that money to pay off debts, add a lump sum to savings or go on vacation. But it would help if people saw their refunds as just another paycheck, and not as extra money, according to Klontz.

“It helps to understand that it’s not actually a bonus from the IRS,” he says. “It’s a return of your money because you were overpaying your taxes. You need a level of consciousness around it.” 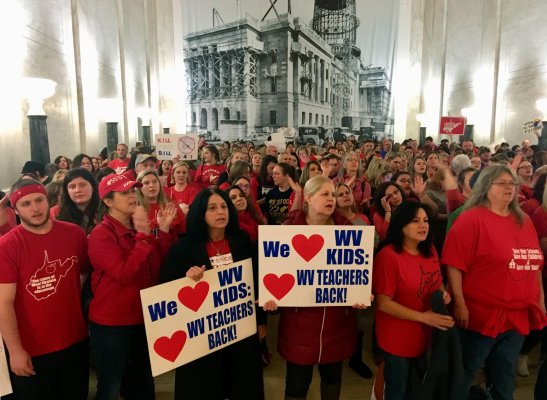 Teachers Walk Out Again
Next Up: Editor's Pick