Amazon isn’t an unstoppable beast after all. It was beaten in New York City by its own hubris and miscalculations.

After facing local opposition to its plan to open a large corporate office in New York, Amazon said on Thursday that it was dropping the idea altogether, along with a pledge to hire up to 25,000 for its new location over a period of years. Whether Amazon’s pullout is good or bad for New York City will be debated tirelessly by politicians and urban residents for months. It is a clear loss for Amazon and a wake-up call for all tech companies.

Amazon misjudged by setting inflated expectations for what its “HQ2” could deliver. The company had a yearlong beauty contest for hundreds of cities in North America, promising that their months of efforts to answer Amazon’s voluminous requests for information and their many promises of tax breaks would be rewarded with up to 50,000 jobs and bragging rights for having landed a corporate resident of Amazon’s stature.

Then it turned out that Amazon’s co-equal headquarters was split effectively into three — with New York City, the Washington area and Nashville each landing new Amazon branch offices. This split decision was a bit of a letdown after Amazon held a public municipal contest for the company’s affection.

After all that buildup, the letdown was palpable. Amazon was promised up to $3 billion in tax breaks and other incentives from the city and state of New York, and that headline number added fuel to concerns that Amazon would take more from New York City than it would contribute to a city already grappling with income inequality and overtaxed infrastructure. The editorial pages of both the New York Times and the Wall Street Journal — which don’t tend to agree on anything — each came out in opposition to Amazon’s deal with New York.

It didn’t help that Amazon’s announcement of its site selection coincided with the election of a new wave of Democrats in New York City who were more skeptical of corporate largesse. Amazon simply misread the mood in New York City, as did the governor and mayor that Amazon had courted to its side.

But this tale is about more than Amazon, and more than the peculiar politics of New York City. As Amazon CEO Jeff Bezos is finding out in his personal life, Amazon’s growing size, profile and influence come with a side effect of unwanted attention. That has been true for all the U.S. technology companies in the last few years.

The HQ2 failure in New York should prompt soul searching at Amazon, and it serves as a warning to all powerful technology companies: No longer will they be welcomed with unquestioned open arms in any city, state or country where they want to do business. There will be no hero’s welcome for technology giants no matter where they go. This is the new reality for big tech. Welcome to the techlash. 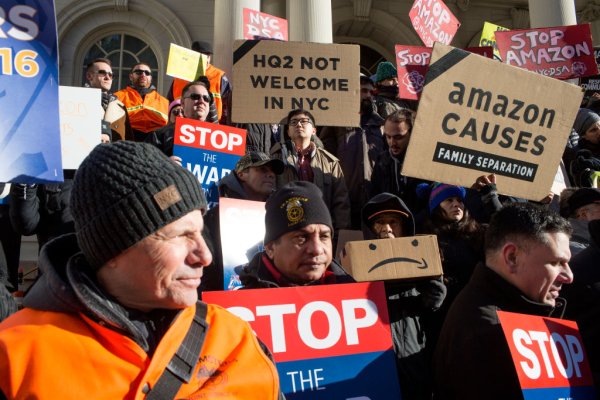 Report: Amazon May Abandon NYC Plans
Next Up: Editor's Pick