Rep. Alexandria Ocasio-Cortez declared victory when Amazon announced Thursday that it would not build a second headquarters (known as HQ2) in Queens, New York. Gov. Andrew Cuomo called it a “lost economic opportunity” and blamed “a small group [of] politicians [who] put their own narrow political interests above their community.”

The dispute between the two Democrats lays bare a divide over the plan to offer $2.8 billion in tax breaks for Amazon to establish a major presence in New York City. On one side, old hands like Cuomo; on the other, the newly insurgent, left-leaning wing represented by Ocasio-Cortez.

“Today was the day a group of dedicated, everyday New Yorkers and their neighbors defeated Amazon’s corporate greed, its worker exploitation and the power of the richest man in the world,” Ocasio-Cortez wrote on Twitter. The new development would have been in the Long Island City neighborhood of Queens, near Ocasio-Cortez’s district.

The outspoken freshman Congresswoman was a critic of the deal Cuomo and Mayor Bill de Blasio had brokered with Amazon.

Cuomo and other supporters of the project said that Amazon would have brought more than enough investment to the city to justify the tax breaks, and would have established New York as a tech hub to rival other hubs like San Francisco.

Additionally, he said, HQ2 would have brought “at least 25,000-40,000 good paying jobs for our state and nearly $30 billion dollars in new revenue to fund transit improvements, new housing, schools and countless other quality-of-life improvements.”

However, Ocasio-Cortez on Twitter questioned the validity of the jobs figure and pointed to a report that Amazon will pay zero federal income tax in 2018, despite $11 billion in profits.

“$0 for schools. $0 for firefighters. $0 for infrastructure. $0 for research and healthcare,” she tweeted Thursday. “Why should corporations that contribute nothing to the pot be in a position to take billions from the public?”

In Amazon’s search for a city to host HQ2, the company invited city boards to put forward bids, which Ocasio-Cortez and others criticized as a means for the company to secure the largest tax breaks possible.

Ocasio-Cortez was elected to Congress for the first time in last year’s midterm elections. The following week, Amazon announced that New York and Arlington, Va., were the winners of its much-hyped HQ2 search competition. Immediately, the congresswoman-elect stated her opposition to the proposal.

“Amazon is a billion-dollar company. The idea that it will receive hundreds of millions of dollars in tax breaks at a time when our subway is crumbling and our communities need MORE investment, not less, is extremely concerning to residents here,” she said on Twitter last November. “It’s possible to establish economic partnerships [with] real opportunities for working families, instead of a race-to-the-bottom competition.”

Amazon has said it will continue to hire extra workers in New York despite walking back its HQ2 plans. 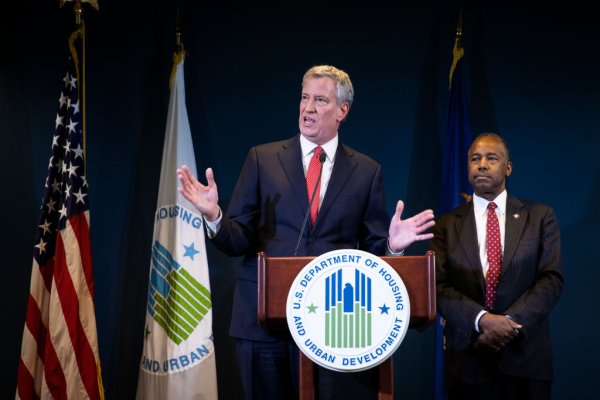