'We Got Savage.' Rapper 21 Savage Describes Being 'Targeted' During ICE Arrest

The rapper 21 Savage described his arrest and detainment by U.S. Immigration and Customs Enforcement (ICE) in a new interview following his release on Wednesday from a detention center.

“I was just driving and I just seen guns and blue lights. And, then, I was in the back of a car, and I was gone,” the rapper, born She’yaa Bin Abraham-Joseph, told ABC’s Good Morning America. “They didn’t say nothing. They just said, ‘We got Savage.'”

“It was definitely targeted,” Abraham-Joseph added.

ICE spokesperson Bryan Cox said Abraham-Joseph was taken into custody in a “targeted operation” following the rapper’s arrest on Feb. 3. The agency said Abraham-Joseph, who was born in the United Kingdom, entered the U.S. legally as a teenager in 2005 and continued to stay in the country after his visa expired in 2006.

But according to Abraham-Joseph and his attorneys, the rapper came to the U.S. legally when he was a 7-year-old. He returned to the U.K. for a month-long visit in 2005, and came back to the U.S. on an H-4 visa that July. That visa expired in 2006, taking away Abraham-Joseph’s legal status.

“I didn’t even know what a visa was,” Abraham-Joseph said when asked on ABC if he was aware of his immigration status. “I was seven when I came here. I knew I wasn’t born here but I didn’t know what that meant as far as transitioning into an adult.”

After about nine days in custody, Abraham-Joseph was granted a release on a $100,000 bond on Tuesday. Asked if he was concerned being deported, he said, “Yeah, but I feel like I done been through so much in my life, like, I learned to embrace the times when I’m down ’cause they always build me up and take me to a new level in life.”

He added that the experience made him want to bring awareness to the tens of thousands of people currently in immigration detention.

“I’ve been here 20 years, 19 years. This is all I know,” he said. “I don’t feel like you should be arrested and put in a place where a murderer would be for being in the country.” 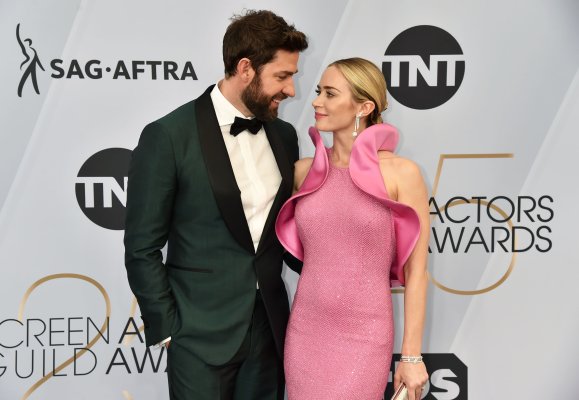 8 of Emily Blunt and John Krasinski's Most Romantic Moments
Next Up: Editor's Pick