Almost five times as many children have died in conflict zones than fighters between 2013 and 2017, according to a report by Save the Children.

At least 870,000 children under the age of five have lost their lives as a result of armed conflict, a number far greater than the close to 175,000 fighters estimated to have died in the five-year period.

The data was released Friday ahead of the Munich Security Conference, which will take place Feb. 15-17. The annual conference gathers more than 450 high-profile leaders to debate international security policy.

The report analyzed data from 10 of the worst conflict-affected countries for children in 2017, including Afghanistan, Yemen and Syria.

Many of these deaths are attributed to indirect effects of war such as hunger, poor access to healthcare, sanitation and proper infrastructure, and denial of aid.

In particular, the report examined the war in Yemen, where an estimated 85,000 children under five may have died from extreme hunger or disease.

Last year, the photo of an emaciated 7-year-old girl, Amal Hussain, on a hospital bed in northern Yemen became a symbol of the country’s ongoing humanitarian crisis.

Hussain’s parents reported that she died a week after the photo was taken.

“Today there are more children living in areas impacted by conflict than at any stage in the past two decades,” Save the Children Australia CEO Paul Ronalds said.

The report found that 420 million children were residing in conflict zones in 2017, up 30 million from the previous year.

“It is appalling that in this day and age we are going backwards on principles and moral standards that are so simple – children and civilians should never be targeted, no matter what,” Ronalds said.

Pressure is mounting on foreign governments to stop providing material and other support to the Saudi-led coalition behind the intervention. Ronalds called on Australia to halt defense export licenses to Saudi Arabia, suggesting that supplying military equipment undermines humanitarian assistance provided by Australian aid.

On Wednesday, the U.S. House of Representatives passed a resolution that aims to withdraw U.S. troops from the country. The assertive move put lawmakers on a collision course with President Donald Trump, whose alliance with Riyadh has come under increasing scrutiny following the murder of Saudi columnist Jamal Khashoggi at his country’s consulate in Istanbul last October. 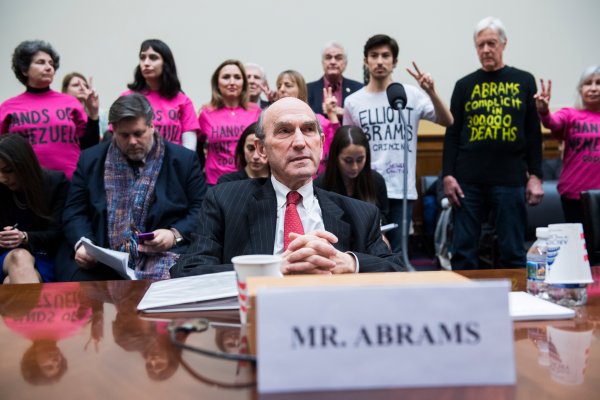 Ilhan Omar Clashed With Venezuela Envoy Elliott Abrams Over Washington's Role in Latin America. Here's the History Behind Her Claims
Next Up: Editor's Pick