‘He Proposes Peace, But Invades Women’s Bodies.’ Inside the Allegations Against Costa Rica’s Former President and Nobel Laureate

People walk through a pedestrian zone where graffiti that reads "rapist" is seen on the street over the face of the Nobel Peace Prize winner and Costa Rica's former President, Oscar Arias, who was accused of sexual assault. San Jose, Costa Rica, Feb. 8, 2019.
Ezequeil Becerra—AFP/Getty Images
By Anna-Catherine Brigida/San José, Costa Rica

A pristine, white, two-story building stands in downtown San José, home to the Arias Foundation for Peace and Human Progress. It is named after Oscar Arias, one of the country’s most revered presidents, who started the foundation after winning the Nobel Peace Prize in 1987 for his efforts to end civil wars in Central America.

But a string of sexual assault allegations against Arias emerged in early February, casting a shadow on the legacy represented by the building. On Feb. 8, feminist groups protested outside the building with signs reading, “Oscar Arias rapist”, “I believe you” and “He proposes peace, but invades women’s bodies.”

On Feb. 5, Alexandra Arce von Herold, a psychiatrist and antinuclear activist, filed formal charges of rape against Arias for putting his hands up her skirt and penetrating her with his fingers in 2014 while at his house for a business meeting. (Under Costa Rican law, rape includes penetration by fingers or other objects.) An unexpected outpouring of support has followed the first report of these charges. At least eight other women have come forward to share their own experiences of being sexually harassed or assaulted by Arias, although only one of those eight have joined Arce von Harold in pressing charges. Among the eight are a Costa Rican journalist, a college professor, and a former Miss Costa Rica. Many are now calling it the country’s #MeToo moment.

In Latin America, a region that has yet to grapple with the #MeToo movement, the allegations against Arias have forced citizens to confront uncomfortable discussions about sexual assault, gender equality, and unequal power dynamics. For the women who have come forward, speaking out is not just about this one case, but also the larger implications for gender equality in a country where 25 percent of women are married by the age 18, women only hold 33 percent of parliamentary seats, and abortion is illegal except in cases where pregnancy is a health risk or threatens the life of the mother.

“I am adding my voice to what I am certain is a rising number of women against Mr. Arias and against sexual violence in general,” Carina Black, executive director at the Northern Nevada International Center at the University of Nevada, Reno (UNR) and one of the women who has publicly shared her story, wrote in a statement sent to TIME and other media outlets. She first came forward about her experience in an interview with the New York Times. In 1998, when Arias was visiting UNR, he pinned Black against an elevator wall and tried to kiss her against her will, her statement alleges. (She has not filed formal charges.) Black emphasized the need to speak up to help bring about the kind of change that will mean future generations of women can go about their daily lives without fear of being assaulted.

Gloriana Valladares Navas, a lawyer for the 78-year-old Arias, confirmed to TIME that two women have filed formal changes against Arias: Arce von Herold and Jazmín Morales, a former Miss Costa Rica. She told TIME that under Costa Rican law, neither she nor Arias can comment on the cases while the investigations are pending. Through his lawyers, Arias also declined to comment on the other cases.

“In my public life I have promoted gender equality, because I believe that it is an indispensable means to achieve a more just and equitable society for all people,” Arias said in a statement Feb. 5 after the first woman came forward in which he denied the allegations. On Feb. 13, Arias gave a statement to prosecutors about the allegations, but would not speak to media about the case.

Arias, who served as president from 1986 to 1990, and again from 2006 to 2010, is still a powerful figure in Costa Rican society. In 1987, he won the Nobel Peace Prize for his work promoting cease-fires for countries in the region undergoing civil wars. In 2006, he became the first Costa Rican President democratically elected to a second term. (Costa Rica barred re-election until 2005 and Arias was a proponent of allowing second non-consecutive terms.) Through his foundation, Arias has continued to support peace-building initiatives around the world.

His towering legacy presents an additional challenge for women who already risk backlash by speaking out. Morales, the former Miss Costa Rica, told the New York Times that three high-profile Costa Rican lawyers refused to take her case because of connections to Arias. In 2015, Morales went to Arias’ house to retrieve a book he said he wanted to give her. As she was leaving, Arias tried to forcibly kiss her, according to the formal complaint that Morales filed, which her lawyer shared with TIME. Morales declined to be interviewed for this article, citing the emotional toll of previous interviews.

Similar concerns were expressed by Marta Araya Marroni, an editor who came forward to local media on Feb. 6 about unwanted sexual comments Arias made in 2012 while she was working for a Costa Rican bookstore chain, including offering to give her a massage. He also touched her leg in an inappropriate way on at least one occasion, she alleges.

“As victims of these types of acts, our privacy has been damaged in the most unfathomable way and that is why it is so difficult to talk about it, even in private,” Araya Marroni said in an interview with TIME, conducted over email because she has a hearing impairment. Araya Marroni noted that the impact on individuals often gets lost because of the focus on Arias as a public figure. “The most relevant part is what happened to us and how we feel about it.”

Arias still garners countrywide respect for his political accomplishments. Nevertheless, his public standing has been affected since criminal charges of breach of duty were formally presented by the attorney general in August 2018, relating to Arias’ decision to allow a Canadian gold mine to operate in Costa Rica despite environmental concerns. A court must now decide if Arias will go to trial for the case. The case was previously dropped in 2014. Arias has denied any wrongdoing in the case.

Deeply entrenched sexist attitudes in Costa Rica still lead some people to doubt the intentions of women who come forward with sexual assault allegations. Yet the multitude of women sharing their stories about Arias has added more strength to their collective voice.

“To tell you the truth, I was skeptical when the first woman came forward,” says Danilo Villalobos, a 43-year-old insurance broker and part-time taxi driver from San José, who shared his thoughts on the case while driving in the city recently. “But now that many others have, it seems true.”

The women who have spoken up send a powerful message to other Costa Rican women who have historically faced barriers to justice, says Larissa Arroyo Navarrette, a Costa Rican lawyer and director of human rights civil society group Acceder. The fact that women are accusing someone who is renowned both at home and abroad is empowering, she says. “[It] emboldens other women to be able to formally accuse their boss, neighbor, or sister’s husband.”

“Children and adolescents are watching us and listening to us,” said Araya Marroni, who works with youth in Costa Rica through women’s rights organization Unidas Talamanca. Much like the #MeToo movement elsewhere, the discussion sparked by the allegations against Arias has extended beyond the case itself. “It has a cascading effect of talking more about sexual assault,” Arroyo Navarrette says. “The problem is not just one man. It’s not just Oscar Arias. It’s a structural, historical, and systemic problem.”

On Friday, hundreds marched through downtown Costa Rica to show their solidarity with the women who have come forward, chanting “No means no,” and “Oscar Arias, macho oppressor.”

“There are people who are going to be on his side because he won the Nobel Peace Prize, but my position is clear. I’m with the women who have spoken out,” said Karla Gonzalez, a 28-year-old university student studying psychology, who held a sign saying “I believe you.” She told TIME her own story of the first time a man groped her without her consent, when she was just 11 years old and in the supermarket. “The more that we stay quiet, the more this will keep happening,” Gonzalez added. “That’s why we have to take to the streets to yell that this is enough.”

For many participants, the march was not just about showing solidarity. They hope women are able to access justice in a system that they believe has put up too many barriers for women in the past.

“The system is not just, so we are going to demand that it is,” said Claudia Sanchez, a 31-year-old college professor. “We are going to do everything that is necessary for justice to come for these women.” 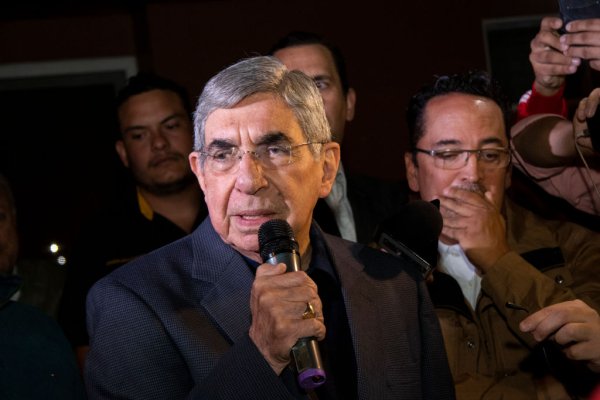