The World's Biggest Passenger Plane, the A380, Is Dead. Here's What Killed It

The aviation graveyard is littered with superlative aircraft that didn’t stay in the air for long. There’s Howard Hughes’ “Spruce Goose,” then the largest plane ever built and designed as a military hauler, which flew just once (a very generous definition of “flew”), but arrived too late for its intended role in World War II. There’s the Concorde, among the fastest passenger airliners to ever fly, which succumbed to high operating costs and noise rules spurred by its deafening supersonic boom. And now there’s the A380, currently the world’s largest airliner, which maker Airbus announced Thursday is being retired after just 12 years in commercial service.

The A380 is an engineering marvel and widely beloved by passengers. But economics shares no such sentiment. A four-engine superjumbo in what’s become a twin-engine world, the A380 is expensive for airlines to fuel and maintain. Then there’s the sheer passenger capacity of the beastly aircraft, which could fit anywhere from around 550 passengers to upwards of a mind-boggling 800, depending on the configuration. Those numbers are impressive on paper, but troublesome from a business perspective. The aviation industry is about “putting butts in seats,” as the saying goes. The more unfilled seats on any single flight, the more an airline can lose. That’s why airlines sometimes offer crazy discounts — getting something is better than getting nothing. With the A380, having that many seats can get you in serious trouble if you can’t find enough butts.

“Filling up 600 passengers is relatively difficult for an airline. It’s much easier if you, for example, sell tickets for a [Boeing] 787 with capacity of, say, 200 passengers,” says Bijan Vasigh, professor of economics and finance at Embry–Riddle Aeronautical University. “Airlines didn’t want to take the risk of selling 600 seats, and at the end only 60% of the seats are sold.”

There was a time when the A380 made sense — or at least, there was a viable argument for building it. It takes many years for a new airplane design to go from a glimmer in a designer’s eye to sitting at gate B37, waiting to haul you off to London or Hong Kong or wherever. The A380 program can be traced back as far as the late 1980s or early 1990s, depending on how you count. In the aviation world, those years were what we now understand to be the tail end of the superjumbo era, dominated by Boeing’s iconic 747 (another beloved aircraft that’s not long for the passenger-carrying world for similar reasons as the A380.) International airline routes were then built around mega-hubs. For the airlines, there was some logic in cramming as many people as you could onto a single flight between these hubs, then using smaller aircraft (or partnering with other airlines) to get people to their final destination.

Like any process as complex as putting a new superjumbo in the skies, the A380 suffered from numerous delays. As it finally got flying commercially in 2007, the international air travel business was starting to change. New fuel-efficient airplane and engine designs have been making it possible to do long-haul flights on twin-engine aircraft, like Boeing’s 787 and Airbus’ own A350 series (airplanes with half the number of engines tend to be cheaper to fuel and maintain.) Those aircraft are making it feasible for international airlines to run more direct routes to a wider variety of destinations, lessening the reliance on the megahub model and, in turn, making it less practical to stuff hundreds and hundreds of people onto a single plane. Indeed, it was Emirates’ decision to switch a handful of A380 orders to smaller aircraft that proved the program’s death blow.

While some passengers may lament the impending death of this remarkable aircraft, they stand to benefit from the changes that caused the A380’s demise, says Vasigh. “For business travelers … the more frequent flights will be more attractive,” he says. “If you have smaller aircraft, you’re able to provide more frequency, for example one flight in the morning from London to New York City and one flight in the afternoon with an aircraft of 250 seats. But if you’re using an aircraft with 600 seats, you would not be able to provide more than one flight.”

None of this is to say the A380 will disappear from the skies overnight. Airlines like Emirates and Qantas will likely keep flying it for years, in part because they’ll probably have trouble finding anyone who wants to buy them (eBay, anyone?) Airbus stressed on Thursday that it’ll keep supporting the aircraft long after it stops building new models. And while it’s something of an embarrassment for the European planemaker, the company has other aircraft waiting in the wings that make more sense in today’s aviation world.

And, as they always do, aerospace companies will keep chasing the superlatives they seem to love so much. Boeing just this month announced a “significant investment” in Aerion, a startup that hopes to make a sort of mini-Concorde supersonic business jet, while a similar startup, Boom, is backed by Sir Richard Branson. Never mind history, someone in the aviation world will always be chasing the titles of “biggest” or “fastest.” Whether they can make money that way is another question entirely. 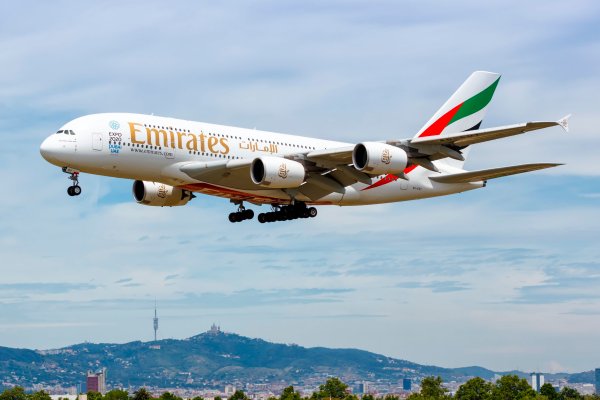 The World's Largest Passenger Airliner Is in Danger of Being Canceled
Next Up: Editor's Pick