Philippines journalists Maria Ressa, an outspoken critic of President Rodrigo Duterte, was released on bail Thursday following her arrest a day prior on a charge broadly viewed as an attempt to silence her.

Ressa, editor and CEO of the influential English-language news website Rappler, was apprehended at the company’s Manila headquarters Wednesday night and charged with “cyber libel.”

Philippines broadcaster ABS-CBN reports that Ressa was released after posting bail equal to about US$1,915.

The latest charge against Ressa, a former CNN bureau chief and the recipient of numerous journalistic awards, pertains to an article published in 2012 about businessman Wilfredo Keng’s alleged links to human trafficking and the illicit drug trade.

The law under which the charges were brought was enacted several months after publication of the article.

Ressa’s arrest was immediately met with international condemnation, with many saying it is the latest example of Duterte cracking down on high-profile critics who oppose his hardline drug policies.

Rappler is one of the few media organizations in the Philippines that openly criticizes Duterte, regularly questioning the accuracy of his public statements and denouncing his drug policies.

Last year, Rappler compiled a collection of the president’s remarks published under “The Duterte Insult List,” highlighting ad hominem attacks or curse-laden remarks made during his presidency.

The organization also reported critically on alleged extrajudicial killings related to his war on drugs, as well as his public admission that he molested his family’s maid when he was a teenager.

Presidential spokesman Salvador Panelo denied the latest charge was related to her work as a journalist.

“This has nothing to do with freedom of expression or the press,” he told ABS-CBN. “Regardless of who commits any crime, he or she will be charged in accordance with the law.”

In 2018, Ressa was named as a TIME Person of the Year for her work as an advocate for global press freedom. 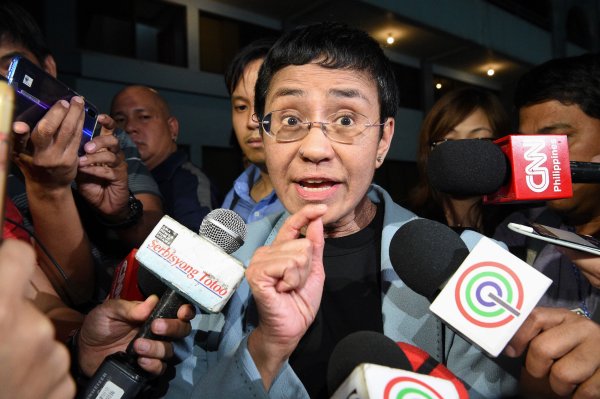