Conservationists have captured their first ever high-quality images of the elusive black leopard in Kenya, confirming previous reports of sightings and proving that the rare creatures do indeed reside in the East African country.

The footage was shot by a team of scientists affiliated with the San Diego Zoo, after they set up remote cameras in Laikipia County, north of Nairobi, as part of a large-scale study of leopard populations in two conservancies.

The team intensified their camera placements when they heard reports of sightings, yielding multiple observations of the animal, according to San Diego Zoo scientist Nick Pilfold, cited by CNN.

Will Burrard-Lucas, one of the photographers, was delighted by the captures.

The pitch-black coat of the black leopard, also known as a black panther, is the result of melanism, a gene mutation that causes an overproduction of pigment. According to the San Diego Zoo, melanism makes the coat appear completely dark in the daytime, but infrared imagery reveals the leopard’s iconic rosette patterns at night.

Melanism occurs in about 11% of leopards globally, but most live in Southeast Asia, Pilford said.

The sighting highlights the importance of developing a conservation program to protect the species. San Diego Zoo is working closely with local partners to track and research leopard populations in the area to help maintain a healthy ecosystem in which they can thrive.

Leopards are listed as vulnerable on the International Union for Conservation of Nature’s (IUCN) Red List of Threatened Species, at risk of habitat loss, competition for prey and hunting activity globally. 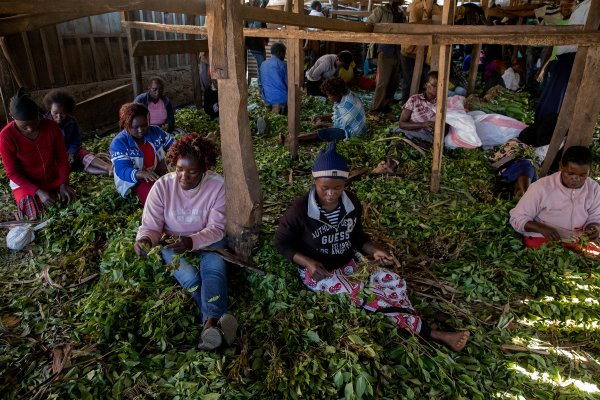 'I Need the Money But I Feel Guilt.' How a Drought-Resistant Crop Turned Women in Kenya into Reluctant Drug Lords
EDIT POST