But behind the scenes, conservative energy policy experts say that, perhaps counterintuitively, the Green New Deal actually offers a new opportunity for Republicans to present their own solutions to climate change.

By shifting the conversation to the left, the Green New Deal has given conservative lawmakers an opening to present centrist policy proposals without looking like they are giving Democrats a political win. At the same time, progressive rhetoric surrounding the issue has contributed to a sense of urgency in the public dialogue, encouraging influential corporate lobbyists, who support moderate solutions to address climate change but want to avoid policies that include heavy regulations, to act proactively. Ultimately, Congressional Republicans’ reaction to the Green New Deal may offer a glimmer of hope that a legislative climate solution will pass a divided Congress in coming years.

That maneuvering may be necessary for the political survival of at least some Republicans. Nearly 3 in 4 Americans, including a majority of Republicans, now agree that climate change is happening, according to a December poll from the Yale Program on Climate Change Communication. “This is an opportunity to articulate a vision,” says Heather Reams, executive director of Citizens For Responsible Energy Solutions.

The policy solution that could actually make a dent in U.S. carbon emissions while earning Republican support is some version of a carbon tax, which would require major companies to pay to emit carbon dioxide. The government could then use that new revenue stream to fund anything from infrastructure projects to new tax cuts.

While broad-based Republican support for such a proposal has been slow to build, the idea has won the endorsement of both leading conservative economists and large corporations, many of which have powerful constituencies in Congress. Both ExxonMobil and ConocoPhillips have lobbied in favor of a proposed carbon tax known as the Baker-Shultz plan, after former GOP Secretaries of State James Baker and George Shultz. Reps. Francis Rooney of Florida and Brian Fitzpatrick of Pennsylvania have also said they plan to aggressively push a carbon tax bill in the House in next two years, while Sen. John Cornyn of Texas, who served in Senate leadership until last year, tweeted in favor of a carbon tax in December.

The threat that Congress might either pass elements of the Green New Deal, or rally public support for similar policies imposing stringent new regulations on American corporations, might be enough to push corporations to expand their lobbying effort. “They want a sustainable economy,” says Curbelo. “They want to achieve that in a way that doesn’t bankrupt them.”

But energy policy experts warn that unified Republican action on bills designed to reduce carbon emissions is still a ways off. The signal from corporate America needs to grow stronger for Republicans to come to the table with real solutions, says Democratic Sen. Sheldon Whitehouse of Rhode Island who has led efforts to pass climate legislation. “Once you’ve set the conditions for victory then you can have a conversations about carbon pricing, Green New Deal, leave it in the ground, whatever,” he says.

Despite growing conservative and corporate support for a carbon tax, most Congressional Republicans remain publicly opposed to the idea. Last summer, House Republicans overwhelmingly backed a resolution that sought to preempt any momentum on the issue, declaring that “a carbon tax would be detrimental to the United States economy.” Only six House Republicans voted against the resolution.

On Feb. 12, Senate Majority Leader Mitch McConnell announced that he would bring the Green New Deal to a vote in perhaps a similar attempt to illustrate Republicans’ continued unified opposition to such actions. The bill would likely fail by a wide margin.

But conservative energy analysts say those concerned with Republicans’ changing stance on the issue is evolving more subtly. They point to recent House Science and Energy and Commerce committee hearings as a sign that Republicans are increasingly sincere about their concern over climate change. Unlike in recent years, Republicans on the committee said in hearings this week they understood the science of climate change and declined to call witnesses that outright denied the scientific consensus, as they have in the past.

“As a Republican working on climate, this has been an extraordinary week,” says Alex Flint, executive director of Alliance for Market Solutions, a conservative group that supports a carbon tax.

While Republicans have almost universally slammed the Green New Deal proposal offered by Rep. Alexandria Ocasio-Cortez and Senator Ed Markey last week, some conservative analysts have also said in private that it contains some potential areas of bipartisan consensus. Infrastructure funding, as well as clean energy research and development, enjoy strong bipartisan support, for example. And job retraining programs have attracted support on both sides of the aisle in the past. President George W. Bush signed the Green Jobs Act into law in 2007.

“I don’t think anything called the Green New Deal is likely to earn conservative support,” says Rich Powell, executive director at ClearPath, a conservative group that supports clean energy. “But there are a number of elements there that could.”

Marshaling Republican support for climate change measures is only half the battle, moderate climate advocates say. The other half is convincing progressive activists to concede to more incremental Republicans solutions, which many fear are too little too late. Most carbon tax proposals, for example, fall short of what scientists say is necessary to keep global warming from breaching 1.5°C, a level that will unleash some of the most devastating and irreversible effects of climate change. And other Republican proposals around energy innovation don’t even come close.

“We’re saying to Republicans, you had your chance for your market-based solution to climate change,” says Sean McElwee, co-founder of progressive think thank Data for Progress. “Every time you walked away from the table.”

Still, in a world where every bit of temperature rise matters, getting to a moderate solution may be better than nothing at all. 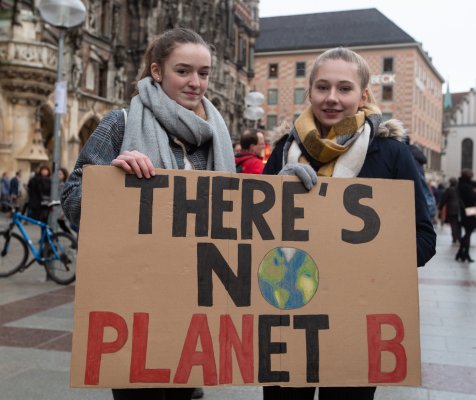 Climate Change Seen as the World's Top Threat in New Poll
Next Up: Editor's Pick