Like a developer who keeps having to scale back plans for a new building, Donald Trump has been forced to dramatically reduce his long-promised border wall in the face of financial reality.

When he ran for president, Trump said a border wall with Mexico would cost somewhere between $8 and $12 billion. One report pegged the tall concrete wall he described on the campaign trail as costing more like $15 to $25 billion. In 2018, he killed a bipartisan deal that would have reportedly included as much as $20 billion in exchange for permanent protection for undocumented immigrants brought to the U.S. as children. Then, in December, he started the longest government shutdown in history over a request for $5.7 billion.

Later this week, Congress will send him a bill that includes just $1.3 billion for a border barrier.

For now, Trump has signaled that he’s likely to sign the bipartisan compromise into law and keep the government open, though he’s indicated that he’s unhappy with the final result on a core campaign promise for him. Speaking to reporters in the Oval Office on Wednesday, Trump said congressional Democrats were being “stingy” with border funding and indicated that he may still pursue other avenues to add more money, although he did not elaborate.

Despite Trump’s evident displeasure, the White House is promoting the plan as a win.

On Tuesday night, after being presented with the rough details of the border security plan that would avert another government shutdown, Trump tweeted that the country “will be getting almost $23 BILLION for Border Security,” using the larger figure that includes money for other measures. Speaking to reporters at the White House Wednesday morning, Press Secretary Sarah Sanders said it’s “just not true” that this deal is worse for the president than what was on the table before the shutdown. “We want to see what the final piece of legislation looks like,” Sanders said. “The president isn’t fully happy, as he said yesterday, with everything that’s in the legislation, but there are some positive pieces of it.”

The deal would fund 55 new miles of a border barrier and includes money for Immigration and Customs Enforcement detention beds at a reduced level, but still higher than the number of beds Democrats had hoped for.

Inside the White House, advisers are working to convince Trump, who rarely delves into details, that he’ll be able to show his supporters that he got more by holding out from the initial talks in December, said a White House official. Trump’s Tuesday night tweet touting $23 billion for border security suggests he’s spinning the deal to his supporters by highlighting the overall impact of the bill, rather than focusing narrowly on funding for a border wall, as he had been throughout this fight. White House officials are also telling the president that House Speaker Nancy Pelosi started out by offering $0 for a border wall, but has compromised by now accepting $1.3 billion for a border fence. In January, Pelosi did say “there’s not going to be any wall money in the legislation.”

But this is all semantics. Pelosi and Senate Minority Leader Chuck Schumer had offered $1.6 billion for what they deemed “border security” in their proposal in December, which included fencing.

And Trump and his top aides now say that whatever money is allotted for the wall in this funding package, he’ll make up the difference by finding more money elsewhere in the government. “Regardless of Wall money, it is being built as we speak!” he wrote in the same tweet promoting the $23 billion figure.

“The president’s got a number of options, he’s going to keep all those on the table,” Sanders said Wednesday of how Trump could get additional wall money outside of this bill. “We’ll make a determination of what is necessary based on what the final piece of legislation looks like.” For weeks, the White House has been saying that Trump could use executive action to use money for the border wall from elsewhere in the government, bypassing Congress entirely. Trump has toyed with declaring a national emergency, or he could potentially use money set aside for military construction, disaster relief and counter-drug efforts, the Associated Press reports. Acting White House Chief of Staff Mick Mulvaney said last week, “We’ll take as much money as you can give us, and then we will go off and find the money someplace else — legally — in order to secure that southern barrier.”

But this is Trump, and he could still decide to spike any agreement before Saturday. In December, White House officials told lawmakers Trump was on board with a deal to avoid a shutdown, but the president changed course when some conservative commentators hammered him for not getting dollars set aside for the wall. Ann Coulter called Trump “gutless” at the time for not holding out for wall funding. “Trump talks a good game on the border wall but it’s increasingly clear he’s afraid to fight for it,” Coulter wrote on Twitter on Feb. 12. Trump ended up killing the December deal which led to a 35-day partial government shutdown. Republicans have been working behind the scenes to head off another shutdown, which consumed headlines for weeks and stalled Senate efforts to confirm more conservative judges and advance other conservative priorities.

“He’s likely to sign whatever it is they come up with unless there’s some real deal killer in there – which is not impossible,” Mark Krikorian, the executive director of the Center for Immigration Studies, told TIME. “It’s my sense he’ll take the, not half-full but quarter-full or eighth-full glass and move on from there.” President Trump is likely to take an executive action that moves some existing funding for counter drug trafficking or another security initiative to fund building more barriers, Krikorian said. Some White House advisers have told Trump that an emergency declaration would set a troubling precedent that could be used by future presidents on issues like gun control or climate change.

Details about the deal provided to TIME by senior congressional aides contain hints about how Republicans in Congress may try to sell it to the President. While only $1.375 billion is allotted for the border wall, these aides noted that all of that funding can be used for new mileage. In total, this number could fund an additional 55 miles of a border wall, which is double the amount provided in last year’s budget, and nearly triple what would have been allotted if Congress simply passed a continuing resolution (though far less than the 215 miles the White House asked for in December). When building this wall border patrol also has jurisdiction over the type of design it can employ — including Trump’s oft-touted steel slats.

In regards to the debate over capping the number of beds in immigrant detention centers, the aides note that while Democrats are trumpeting a 17 percent reduction in beds, there is an additional $750 million the Department of Homeland Security and ICE can use, which could fund another 13,000 beds. Using those funds would cancel out any reduction, senior Republican aides argue. Krikorian saw a “small political win” for Trump when Democrats stepped back from their earlier demands on slashing the number of immigration detention beds.

Progressive groups were not totally satisfied either. They noted that what Democrats were touting as a reduction was actually just lowering the number of beds Congress had originally authorized. But they were explicit in the fact that the President was not getting his wall, and Democratic leadership expressed confidence the caucus would back it. “Clearly there is not funding for a wall and that was very important to us,” said Rep. Mark Pocan, the co-chair of the Congressional progressive caucus. Still, congressional Democrats were careful not to take an explicit victory lap before Trump signs the bill. When asked by TIME on Wednesday if this is a win for Democrats, caucus chairman Rep. Hakeem Jeffries was careful not to gloat over the funding levels for border security, only saying it was a win for the American public because it shows that divided government can work together.

Republicans were more candid in acknowledging they came up short. “Is it enough for the wall we requested? No,” House GOP Leader Kevin McCarthy said Wednesday. “But is it a down payment? Yes.” Multiple other congressional Republicans have also referred to the funding as a “down payment” on the wall to placate the president.

“You cannot get everything you request,” McCarthy said. “You’re going to have to find some common ground.” 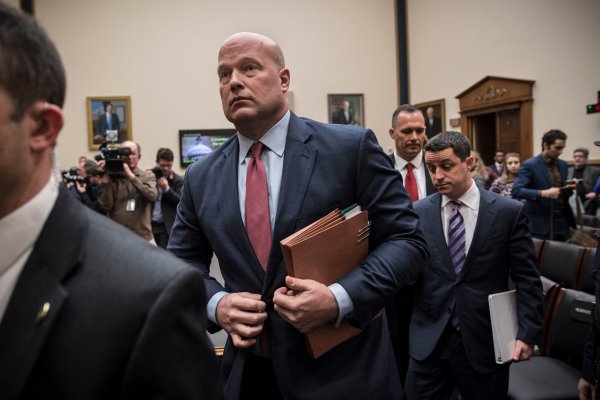