Depression Affects 15% of New Moms. A New Guideline Could Help Prevent It

A new recommendation from a group of independent experts convened by the government could help more new and expecting mothers avoid depression, one of the most common complications of pregnancy and childbirth.

The recommendation is the first from the U.S. Preventive Services Task Force (USPSTF) on preventing perinatal depression, which strikes during pregnancy or after childbirth and affects almost 15% of new mothers. The guideline states that clinicians, namely primary care providers, should provide counseling services, or references to them, to all pregnant and postpartum women at increased risk of perinatal depression. The guidance could help prevent mental health issues in this vulnerable population, and prompt more insurance providers to cover counseling services for pregnant and postpartum women.

After reviewing the relevant research, the USPSTF specifically recommended that at-risk women try cognitive behavioral therapy (CBT), which focuses on changing a person’s thoughts to change how they feel, or interpersonal therapy, which focuses on building relationship skills. Those at heightened risk of depression include single, young and lower-income mothers, people with a history of depression and women showing depressive symptoms including low energy and mood.

The proactive focus of the recommendations is important, says Jeff Temple, a psychologist in the department of obstetrics and gynecology at the University of Texas Medical Branch, who was not involved with the task force. Past USPSTF recommendations have focused on screening for existing depression among all adults, including pregnant and postpartum women.

“I am very happy to see anything related to prevention, whether it’s mental health generally or perinatal depression specifically,” Temple says. “If we can prevent problems from occurring, not only do we do a great service to humans, but [the health care system] saves a great deal of money.”

The new recommendation also means that more mothers will have access to insurance-covered mental health care. Under the Affordable Care Act, private insurance plans are directed to cover preventive care recommended by groups including the USPSTF at no cost.

That’s a step in the right direction, Temple says — but even if they now have insurance coverage, women who need counseling might not be able to find it in the already overburdened U.S. mental healthcare system.

“If we need to see 15% of perinatal women, there’s absolutely no way that we have the ability to do that,” Temple says. “We need to put more money and effort into training more psychologists and counselors.”

The good news, Temple says, is that the USPSTF recommendation could provide the kind of validation hospitals and practices need to dedicate those resources, especially if they see demand for services increasing. Ideally, Temple says, they would focus their efforts on integrating mental health care into primary care, rather than leaving it in a silo.

“If these women are screened and they’re recommended to someone [for counseling] and it’s kind of a cold handoff, very few will follow up with it,” Temple says. “But if one implication of this is that OB/GYN departments start to incorporate counselors and psychologists within their services, then we’ll see a huge benefit. If we did that, I am 100% positive we would see declines in perinatal depression.”

Simone Lambert, president of the American Counseling Association, agrees that the recommendation will likely increase demand for mental health services, but says that’s a small price to pay for better preventive care, which can reduce the need for future treatments.

“The benefits of increased maternal and infant wellness and decreased stigma to seek mental health assistance would likely lead to less of a toll on our healthcare system than when mental health concerns are unaddressed,” Lambert says, adding that healthier moms also lead to healthier babies and families.

Temple says methods like CBT are effective because factors like stress, identity changes and overwhelming circumstances often contribute to perinatal depression, and all of these obstacles can be effectively addressed by a counselor. Research suggests that counseling can provide moderate or substantial benefits to new or expecting mothers, according to the USPSTF’s recommendation. 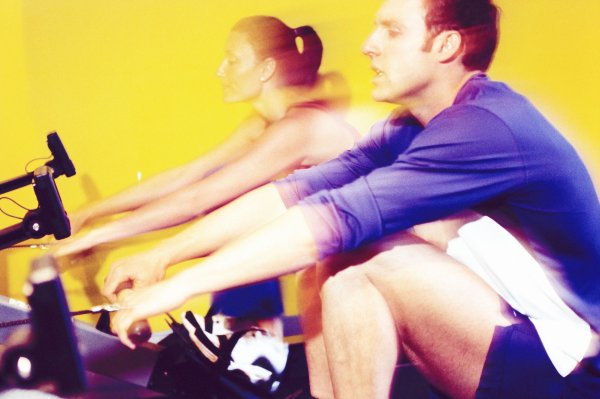 You Asked: What’s the Most Effective Machine to Use at the Gym?
Next Up: Editor's Pick