California Governor Gavin Newsom is abandoning plans to build a high-speed railroad between Los Angeles and San Francisco, saying the ambitious project that was approved by voters and championed by his predecessor is too costly.

Instead, the state will finish roughly 120 miles of track already under construction in the Central Valley, a mostly rural agricultural region that runs down the spine of the state, Newsom said.

“The project, as currently planned, would cost too much and take too long,” Newsom told lawmakers in Sacramento during his first State of the State address. “There’s been too little oversight and not enough transparency.”

California was one of the first U.S. states to champion a government-owned high-speed rail system like those that are ubiquitous in parts of Europe and Asia. Former Governor Jerry Brown defended the project as part of the state’s nation-leading effort against climate change, an issue that Newsom has made a centerpiece of his administration.

The project was long opposed by Republicans in the statehouse and in Congress, who tried to choke off federal funding. The decision to derail the most ambitious parts of the line contrasts with proposals from Congressional Democrats in Washington to boost taxpayer funding on a sweeping package of climate-change measures unveiled by Representative Alexandria Ocasio-Cortez that would boost funding for high-speed rail across the U.S.

The California project’s envisioned 800-mile network, with trains speeding as fast as 220 miles per hour, made it one of the largest, and most costly, public works developments in recent U.S. history. But since $10 billion of bonds were approved by voters more than a decade ago to jumpstart the line, it’s been beset by cost overruns, construction delays and lawsuits by property owners and taxpayer groups.

The California High Speed Rail Authority had estimated the full line would have cost $77 billion to complete. Backers were counting on the private sector to finance most of the costs, though much of that private funding remained uncertain. The Central Valley segment was expected to cost $10.6 billion, according to the latest business plan.

Newsom said workers will continue building a stretch of the line between Merced and Bakersfield. He said his administration would seek to align economic and workforce development strategies in that region — anchored by high-speed rail — and pair them with tools like opportunity zones, to form the backbone of a reinvigorated Central Valley economy.

“I know that some critics will say this is a ‘train to nowhere.’ But that’s wrong and that’s offensive,” he said. “The people of the Central Valley endure the worst air pollution in America and have some of the longest commutes in this state. And they have suffered too many years of neglect from policymakers respectfully here in Sacramento.” 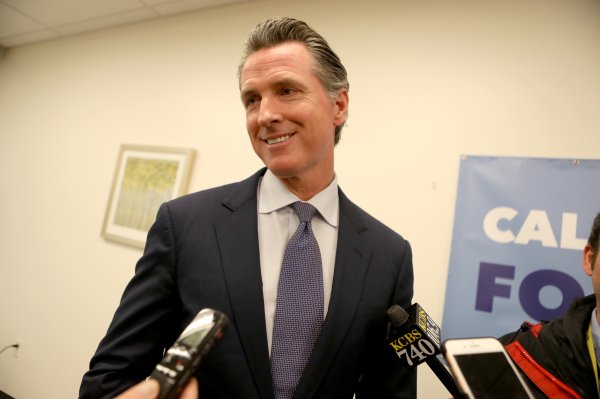 California Governor Accuses Trump of 'Fear-Mongering' in Major Speech
Next Up: Editor's Pick