On Tuesday, California Gov. Gavin Newsom took the stage in Sacramento to give his first “state of the state” address. It was a chance to lay out his vision for leading the world’s fifth largest economy, a state that is home to some one in eight Americans.

But while he addressed issues ranging from high-speed rail to homelessness, the 40th governor of California began by pushing back against the agenda of President Donald Trump.

Newsom criticized “fear-mongering that’s coming out of the White House,” likening Trump’s rhetoric on immigrants to George W. Bush opposing same-sex marriage when he was president, during an era when LGBT people had less public support and fewer civil protections.

“Last week, we heard another president stand up at the State of the Union and offer a vision of an America fundamentally at odds with California values,” Newsom said. “He described a country where inequality didn’t seem to be a problem, where climate change didn’t exist, and where the greatest threat we face comes from families seeking asylum at the border.”

The speech came a day after Newsom defied Trump by ordering that several hundred National Guard troops withdraw from California’s border with Mexico, days after Trump announced that he had ordered 3,750 troops to the country’s southern border to prepare for a “tremendous onslaught” of immigrants seeking to enter the country.

“Tolerance for illegal immigration is not compassionate, it is cruel,” Trump said at the State of the Union, linking immigration to violent crime and other serious problems.

In his speech, Newsom rejected Trump’s rhetoric about an “emergency” at the border as part of a “manufactured crisis,” noting that data has shown that undocumented immigrants are generally less likely to commit crimes than native-born citizens. While more immigrants have sought asylum in recent years, the number of apprehensions at the border has fallen. Newsom said he has directed troops to focus on “real threats” such as fire prevention and going after illegal cannabis farms in the northern part of the state, as well as stopping the smuggling of drugs and guns at existing points of entry on the U.S.-Mexico border.

“California will not be part of the political theater,” Newsom said, insisting that the sate would “stand up for those who are maligned, marginalized and scapegoated.”

Newsom is just a few weeks into the job, but the progressive is emerging as a key voice among Democrats pushing back against Trump’s agenda. He leads a state that is among the most liberal in the nation when it comes to immigration issues and where Latinos have been the largest ethnic group since 2014. 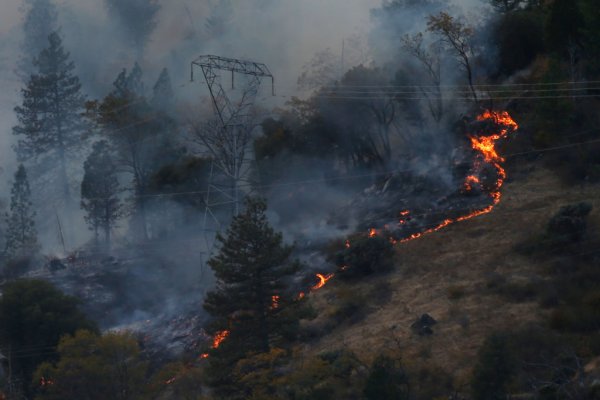 PG&E Will File for Bankruptcy in California Due to Costly Wildfires
Next Up: Editor's Pick