The President of the United States was in Texas on Tuesday, but someone else named Trump made waves in New York.

At the 2019 Westminster Dog Show, one Australian Shepherd named Trump won best of his breed, leaving some fans of the Westminster Kennel Club’s program to interpret the name as a political message of some kind. But Trump’s co-owner and co-breeder, Pat Zapf, tells TIME that the show dog’s name has absolutely nothing to do with the President of the United States. Actually, it has everything to do with a card game.

When the dog was born in 2012, naming him after the ‘trump card’ in bridge — a wild card which changes from hand to hand — seemed innocuous to Zapf, whose grandparents always played the game throughout her childhood. “But at the time, I obviously didn’t know where our political standings would go,” she says.

Upon learning his name, when people react both positively and negatively, Zapf isn’t bothered. “The dog doesn’t know that his name is a controversial topic,” she says over the phone, driving home through the snow to Pennsylvania after Trump’s successes in New York. “He doesn’t care at all. He wants his pets and cookies.” But sometimes, he’ll even have his absolute favorite treat, marshmallows—Trump “has a sweet tooth,” she explains.

The 6-year-old Trump is a star at more than just snacking, though. He won awards of merit in the 2016 and 2018 Westminster competitions and was the No. 1 male Australian Shepherd in 2015. “He’s an old hat at showing,” Zapf says. “He certainly knows what he’s doing out there and he loves his job.”

This will be Trump’s last year competing in shows, but that’s okay—Zapf says the dog will be just as happy laying on the couch and eating potato chips. “He’s had a pretty illustrious career as an Australian Shepherd show dog,” she says, “but more than anything, he’s our pet.” 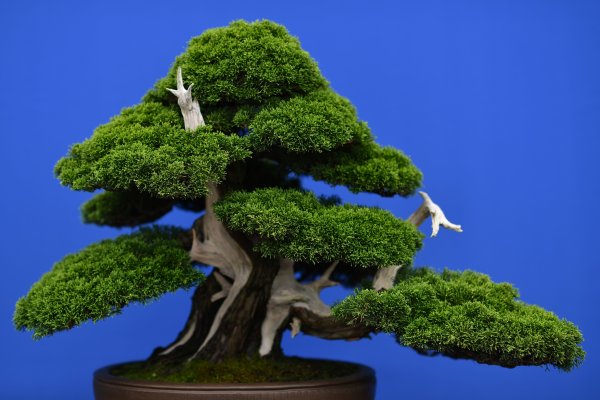 'Are They Being Watered Properly?' Couple in Japan Beg 'Thieves' to Take Care of Their Precious Bonsai Trees
Next Up: Editor's Pick