Amazon's Lorena Bobbitt Docuseries Isn't a Joke. That's Why It's Worth Watching

If you didn’t live through the mid-1990s in America, the premise of the Amazon Prime docuseries Lorena might sound like a new season of true crime parody American Vandal: Late at night, a young wife slices off her sleeping husband’s penis with a kitchen knife. After fleeing the scene, she throws it out the window of her car; later, police recover the organ in time for a surgeon to reattach it. A criminal trial and a media feeding frenzy ensue. The battle of the sexes expands into new territory.

Many of us know, of course, that this is part of what actually transpired between Lorena Bobbitt (who now goes by her maiden name, Gallo) and her then-husband John Wayne Bobbitt in June 1993. Along with O.J. Simpson, JonBenét Ramsey, the Menendez brothers, Tonya Harding, Monica Lewinsky, Amy Fisher and Gianni Versace’s killer Andrew Cunanan, the couple epitomized what Vanity Fair’s David Kamp christened the “Tabloid Decade”—when the news cycle revolved around Court TV, Hard Copy and an expanding cable news landscape but still moved slowly enough to keep this type of crime story in circulation for months.

If this context sounds familiar, that’s likely because it’s been a theme of at least a dozen movies and shows set in that period that have emerged in the past three years. Now that the velocity of news has increased to fever pitch, and the issues of identity and social justice inherent in so many of these tabloid stories have become topics of daily conversation, it’s hard to resist relitigating these transitional moments for the media and society. The result has been a glut of both revisionist documentaries and historical fiction that doubles as cultural criticism. Which raises a good question: Do we need a miniseries about the Bobbitts, too?

Surprisingly, the answer is yes—even one as imperfect as Lorena. Directed by Joshua Rofé (Lost for Life), the four-part series has a big-name executive producer in Jordan Peele. (It’s the second TV project he’s unveiling this week. YouTube’s Weird City, a fun, star-studded anthology that plays like a Black Mirror spoof, debuts on Feb. 13.) Lorena focuses less on gory details (although there are a few more stills of the severed member than there absolutely need to be) than on the issues of gender, race and mass media that surround the notorious case. Rofé not only vindicates his subject, but also demonstrates how she was misunderstood and maligned in the public sphere. And the docuseries reminds us that as recently as a quarter-century ago, marital rape and domestic violence were treated as private matters, rather than the crimes that they are.

At first, the filmmaker is circumspect about his sympathies. Both Bobbitts participated in the series, and in an introductory episode focused on the period immediately before and after the incident, in between interviews with bemused cops and doctors, Rofé reviews their backstory. We get a glimpse of the couple as a prejudiced public saw them in 1993: While John was a charming, all-American Marine, Lorena was an Ecuadorian immigrant who spoke imperfect English, had a history of theft and later posed winsomely in a pool for a Vanity Fair photo shoot. Rofé also points out that John was acquitted of marital sexual assault charges. A barrage of news clips and jokes from comedians and talk-show hosts (Howard Stern, Whoopi Goldberg, Andrew Dice Clay) recreates the madness of those weeks when pop culture was wall-to-wall Bobbitts.

Yet all of this is a way of recreating the mix of confusion, outrage and prurient amusement that marked the public response to the story as it was unfolding, only to make us increasingly ashamed of our knee-jerk reactions as the series progresses. Later episodes hone in on the misogyny, racism and xenophobia Lorena faced, counteracting the notion that the Bobbitts were a funny sideshow: While the second installment explores her background and the couple’s broken marriage, the third centers on the trial, lingering on her harrowing testimony about the rape and other forms of domestic violence she said she suffered at John’s hands.

This footage is both the most effective element of Lorena and the hardest to watch. Lorena weeps, trembles and apparently struggles to breathe on the witness stand. In new interviews as well as 25-year-old testimony from Lorena’s trial, the Bobbitts’ friends and neighbors provide more evidence suggesting that John was hurting his wife; their stories also illustrate a culture that had normalized and ignored marital abuse. By the last episode, when Rofé gets to the separate lives John and Lorena lived after her “not guilty by reason of insanity” verdict, it’s no surprise to learn that John has been arrested multiple times—and found guilty twice—on charges that he battered or harassed subsequent partners.

Lorena isn’t a particularly well-structured documentary. Rofé seems to have had trouble deciding whether he wanted to split up episodes thematically or move in chronological order throughout the series. As a result, Lorena sometimes repeats itself. A finale that keeps jumping around in time (from 1995 to ’90 to ’98 and so on) feels especially disjointed. The show never manages to make any novel points about the mid-’90s news media, either. And like most true-crime tales in this serialization-crazy post-Serial era, it could easily have been a two-hour movie rather than an episodic narrative of twice that length.

Yet the series justifies its existence, even in an era filled reexaminations of tabloid stories from years past. By zooming out to capture what didn’t make it into the original headlines, and everything that has come to pass since the public eye turned away from the Bobbitts, Lorena manages to paint a more complete picture. There is #MeToo resonance here, though that’s hardly unique among sad stories about men and women from any period. What’s more vital is Rofé’s confident rejection of the he-said-she-said false equivalences of, say, the recent 20/20 special The Bobbitts: Love Hurts—and the derisive humor such glib entertainments continue to wring out of real pain. (“Tainted Love” is that show’s theme song.) Lorena may not be a perfect work of art, but it’s a solid step forward for empathy in media. 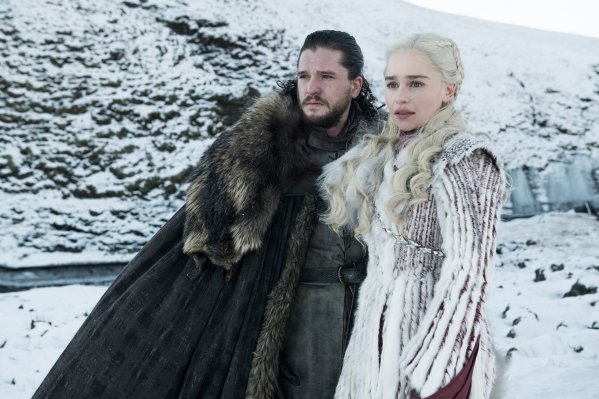 The First Photos From Game of Thrones Season 8 Have Arrived and Winter Is Truly Here
Next Up: Editor's Pick